You shouldn’t rely entirely on your camera histogram

The thing is though, if you’re using it properly, you’ll know that you can’t rely on it entirely.

You need to observe the scene and make a decision too, because you know more than the histogram about what you’re shooting. 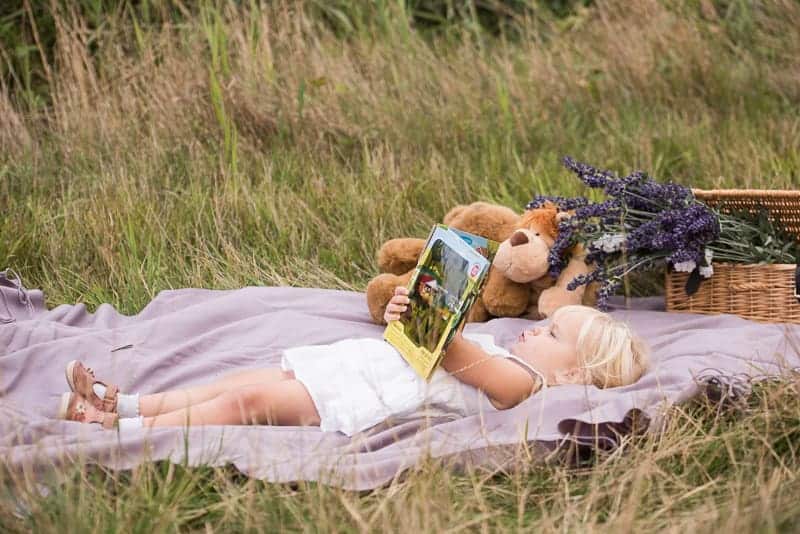 About the photography histogram

Many photo editing programs, like Lightroom, also have a histogram.

So let’s have a quick look at the histogram, because it is actually a very simple tool to read. I’ll break it down into a few good questions…

1. What is a photography histogram?

In photography, a histogram is a graph that represents the tonal variation in an image from dark shadows to bright highlights, and everything in between.

You view a camera histogram on the back of your camera to get an indication of whether you’ve over, under or correctly exposed your image.

2. Why do I need to know how to use a camera histogram?

I find my camera histogram particularly useful when I can’t see the image in the LCD, like when I’m shooting outdoors on a really bright day. In fact, I always wonder how on earth anyone can decide if their image is correctly exposed purely by checking the back of the camera.

When processing a shoot in Lightroom, the histogram helps me to ensure that my adjustments don’t push the exposure too far, causing loss of detail. The histogram also separates the colors out, which is helpful for ensuring all colors within the image are well exposed.

However, histograms are not living beings. They don’t exercise judgement of what’s in a scene or how bright it’s meant to be. They only know how to report back the data of the scene.

Which leads me to my next point.

3. What are a camera histogram’s weak points?

In other words, why can’t you rely entirely on your camera histogram to determine your image is correctly exposed. Here are three example scenarios:

If you find yourself lucky enough to be photographing a polar bear in the Arctic, you’ll know that there’s a whole lot of white and not a lot of other colors, except for the bear’s eyes and nose.

However, your histogram doesn’t know what you’re photographing, only that there’s a whole stack of white and just a smidge of black.

So, when you look at the camera histogram of your polar bear photo, you’ll see that the right side of the graph is full of information and the left is barren.

This shows an accurate exposure for the circumstances.

The reverse is true for a photograph of a black cat on a black background. Lots of black, with the only other color being the eyes.

For an accurate exposure your camera histogram is going to bunch up towards the left of the graph. If it’s not, then your photo isn’t accurately exposed.

Cows in a field

Now we have variety – midtones in the sky and grass, contrasting black and white in the cows.

Your graph will be mainly in the middle, with information spread across it. If it’s bunching towards one side or the other, your shot is under (to the left) or over (to the right) exposed.

That’s a really simple explanation. Now let’s get into the details of how to read a camera histogram.

4. How does a photography histogram work?

I’ve used a photo of a two year old with a serious passion for chocolate cake:

If you’re wondering why it doesn’t look like the histogram on the back of your camera, it’s because I’ve used Lightroom histograms to demonstrate. Same principle, just more detail.

The image was accurately exposed in camera and I then created under and over exposed examples in Lightroom to show you how exposure changes the histogram. 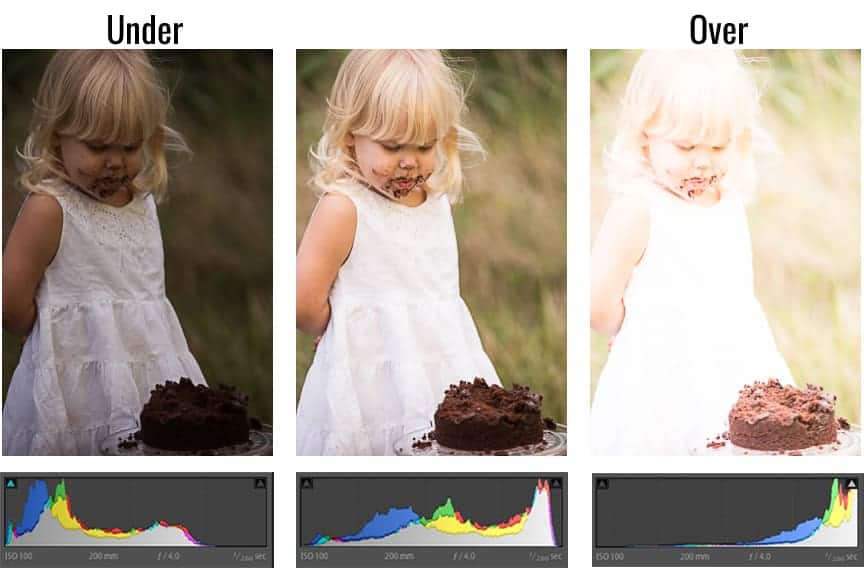 Most of the time, to get an accurate exposure, you need to make sure that the graph doesn’t touch the left and right sides of the box. If this happens it means that your image is either under or over exposed, as you can see in the examples above.

When an image is underexposed we refer to the blacks as being “clipped”, and when overexposed, we say the whites have been “clipped”.

If you clip the whites all detail will be lost in that area and it will be recorded as pure white. There’s no coming back from that in post production.

When you clip the blacks you can still retrieve some of the information in that area in post production. So it’s better to underexpose than to overexpose.

This is one of the reasons why shooting in RAW is better than JPEG.

Further reading: Image quality – the pros and cons of RAW vs JPEG

Speaking of which, remember that the image you see on the LCD of your camera is a JPEG image.

If you shoot in RAW, which has a higher dynamic range than JPEG, more detail will be recorded than what you see in the image on your LCD.

So if there’s clipping, it might be less than it appears on your camera’s LCD.

Don’t fall into the trap of thinking you have to have a perfectly domed hill right in the middle of the histogram.

Also, if your spike in the middle of the histogram hits the top, that’s fine. It just means there’s a lot of that particular tone in the image. Clipping only happens when the graph hits the left or right side.

The histogram example from the back of my camera at the top of this article shows this pattern.

If you photograph a black cat on a white background, it’s a high contrast scene, because the image includes both ends of the tonal range. So your histogram will show peaks towards both ends with a dip in the middle, like a U shape.

Have you heard of exposing to the right?

This is ideal for photographing a subject consisting of mid-tones.

The contrast in the image is low, with no dark areas and no bright areas. In this instance, to get a correctly exposed image, the histogram should read as far to the right as possible, without clipping.

There are two types of scenes that will show clipping in the camera histogram and in these types of scenes, it’s okay if clipping occurs to ensure either white whites or black blacks. They are:

What is high key photography, and how to master it

How to use shadows in photos to add atmosphere

Now that you know how a histogram works, it’s helpful to know that many cameras are equipped with different types of histograms.

The good news is that, as long as you know how to read a histogram, you can understand both types of camera histograms.

You’re probably familiar with the luminance histogram – the one at the start of this article.

That’s the one that shows a white graph on a black background, or vice versa. This measures the overall brightness (luminance) of the scene.

An RGB histogram is really useful for establishing if any of the red, blue or green parts of the image have been clipped.

If you have this function set on your camera, you can see separate red, blue and green graphs. See the image below. 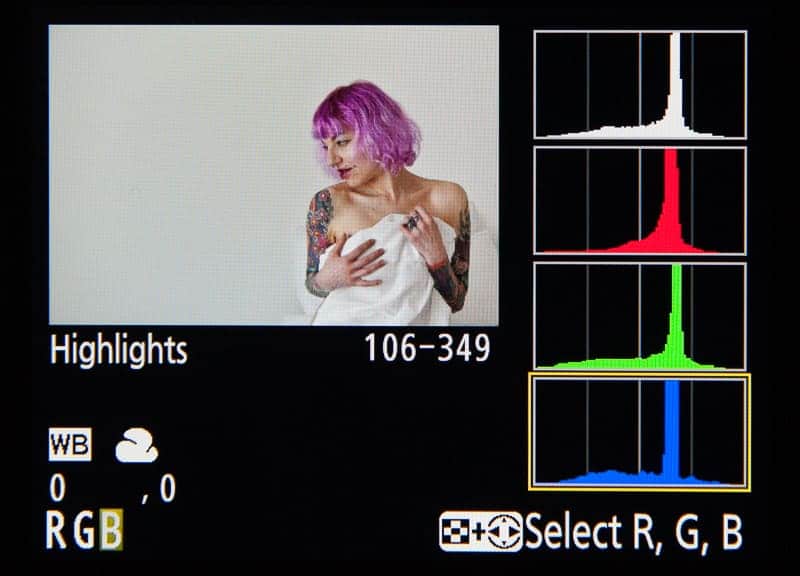 Conclusion on how to read a histogram

Once you know how to read a camera histogram, you’re well on your way to controlling exposure. The key word in my statement at the start of the article was “entirely” – you shouldn’t rely entirely on your camera’s histogram.

As usual with photography, it’s up to the photographer, not the camera, to make the final decision on the outcome of an image. Sometimes you just need a little guided help from your camera’s clever tools.

If you have any questions about how to read a histogram, let us know in the comments.

Also, I love good news, so if my camera histogram tips have helped you to understand how it works, share that too.

21 great photography gifts – what to buy photographers in 2023

How to see before and after in Lightroom editing (3 ways)