Flash vs continuous light photography- which is better for portraits?

We take light for granted …until we first pick up a camera. Then we realise just how important light is in photography and it starts to become confusing, because that’s when we learn about the different types of light – natural light vs flash and flash vs continuous light.

If you choose to use artificial lighting in photography, you’ll naturally start looking around for the best light to buy to help you take great photos. You’ll be confronted with a huge array of choices.

So let’s take a look at the two versions of artificial light so that you can decide which lighting system will suit your needs. Then you can start researching the actual lighting gear you might need.

You’ll find a handy infographic of flash vs a continuous light source at the end of this article. 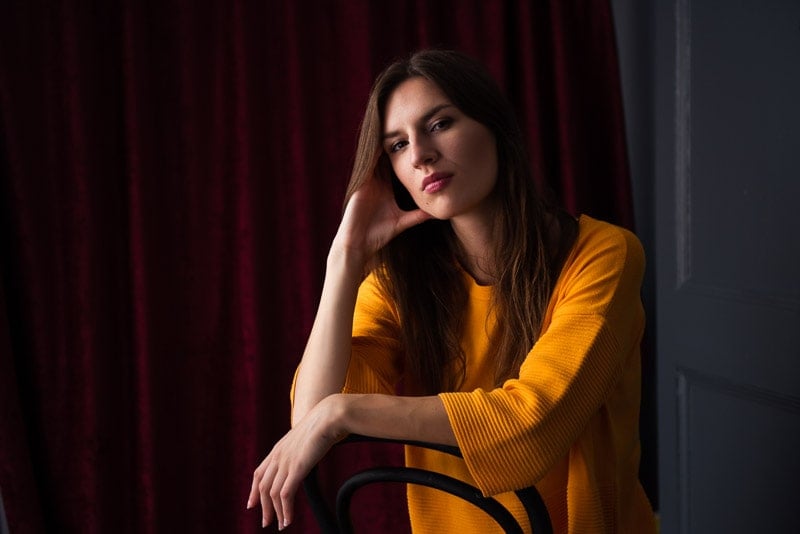 What is the difference between flash and continuous lighting?

Both are a forms of artificial lighting, and can be modified to manipulate the light in the same way that you put a lampshade on a bare bulb in your home for nicer light. Examples of light modifiers include softboxes and umbrellas.

Plus, because both flash and continuous lighting allow you to light the subject in low light conditions you can use a lower ISO than if you were shooting with just natural light, which leads to a better quality image.

Now let’s look at the differences…

Flash photography is also referred to as strobe photography. So when referring to photography lighting that emits a very quick burst of light, you’ll see it referred to with both names – flash and strobes.

Types of strobe lighting are:

Continuous lighting (also called constant lighting) on the other hand, does exactly what it says on the tin – it emits light continuously. So, for example, your desk lamp is a form of continuous light.

Other types of continuous lighting include:

Can you use continuous light with flash?

I often use this combination in the studio when I’m photographing in a blackout situation. I set the flash as my key light and then use the continuous light in different ways:

Why do photographers use flash instead of continuous light?

Each type of artificial lighting has its advantages and disadvantages. What and where you photograph has a big impact on lighting kit choice. Because you can do so much more with flash, most professional photographers use flash more than continuous light.

But there’s a time and place for everything, as well as personal preference.

So, to help you to decide on a photography lighting kit that’s right for you, let’s look at the pros and cons of each.

The biggest advantage of flash vs continuous lighting is that it’s more powerful, so you can use it outdoors to light your subject and maintain a well exposed sky. No more white, washed out, blown out skies!

When your subject is positioned with their back to the sun, their face is in shadow. By adding in flash you can light their face and bring life to their eyes with the catchlights created by the flash.

You can even manipulate the appearance of natural light in photos by making it appear darker than it is, which in golden hour makes the colors in the sky even more saturated.

Powerful strobes are so powerful in fact that you can actually create a completely black background in outdoor photos. To do this you’d also need to set a high shutter speed.

The maximum  amount of light that a flash emits depends on the flash itself. Although monoblocks (also referred to as studio lights) are more powerful than speedlights, their power varies. For example my…

It’s just like deciding on which bulb to buy for your house lights – you look at the wattage and buy according to your needs.

Some brands are more powerful than others, with the more expensive ones usually being the better quality, higher powered options.

You can adjust the amount of light emitted by the flash to ensure that you have enough light not only to light your subject, but even to overpower the ambient light and to freeze motion for action shots.

In fact, overpowering ambient light when freezing motion with flash is important, because if the movement is fast and the ambient light isn’t fully overpowered by the flash, movement can still be evident in a photo. To cut out the ambient light outdoors during the day you will need a faster shutter speed, and if it’s over the flash sync speed of your camera you’ll need to set your flash to high speed sync.

Another essential factor in freezing motion with flash is flash duration. The faster the movement, the shorter the flash duration needs to be for perfectly frozen motion. Even though to our eyes all flash seems like a really rapid burst of light, flash duration varies.

You can’t see where the light will land, so you need to know where to place your lighting for the portrait lighting pattern you want to use when photographing people.

Because you can’t see the light until you take a photo and look at the results on your LCD screen on the back of your camera, it can be difficult to know if the flash is powerful enough, or too powerful. That’s why I use a handheld light meter to measure the strength of the flash. It cuts down on the faff of getting the exposure right. With a light meter you decide on the camera settings that you want to use and then adjust the light accordingly.

So flash photography is a steeper learning curve for new photographers than continuous light, but it really is worth learning.

Speaking of extra equipment, when using flash you need something to trigger it when you push the shutter button so that the flash of the strobe syncs with the split second that the shutter is open. You can do this two ways:

Flash sync speed varies between brands, but is between 1/100th and 1/250th shutter speed. If you use a faster shutter speed than the sync speed of your camera allows, there’ll be a black line in your images. Unless your strobe has a high speed sync function. In which case, you can shoot at very high shutter speeds.

Further reading: Flash sync speed – why there’s a black line on your photos with flash

If using speedlights, rather than larger strobe lights, you may need several flash units to emit enough power when photographing outdoors on a bright sunny day.

It all depends on the power of your flash.

Some flashes recycle faster than others, with the more expensive, higher powered strobes being the fastest. Flash recycle speed refers to the time it takes to recharge between flashes.

A fast recycle time is particularly important if shooting with flash in burst mode. Examples of when you would need a fast recycle speed include photographing:

1. You can see the light

The most obvious pro of constant lighting is that you can see the light, which is a great advantage, especially for portrait photography.

That said, many studio strobes also have a modeling light, which you can turn on during set up to see where the light is falling on the subject. But not all have this function and speedlights definitely don’t.

Continuous light works best indoors as a supplement to window light, so that you can use a lower ISO for less noise in images.

Just make sure that you can adjust the color temperature of the light to match the natural light coming in the window so that you don’t have two different light colors. Using your camera’s white balance presets you can set the white balance to:

Further reading: What is white balance in photography and does it matter?

Because continuous light is on constantly, you don’t need any further equipment to trigger the light. So it can be quicker and easier to set up, especially if you don’t have an incident light meter.

Continuous light is used for video, making it a versatile lighting kit to have if you shoot both still photography and video.

At first glance continuous lighting might seem like a good idea, but there are some definite disadvantages of constant light.

1. Lack of power in bright conditions

The main disadvantage of continuous light is that it’s not as powerful as flash, so might not be powerful enough to compete with natural light outdoors on a bright day.

If, for example, you use the sun to backlight your subject, you need to be careful that the highlights on their hair aren’t blown out. So your lighting needs to be powerful enough to light the face while exposing for the background and highlights.

How well it copes depends on the continuous light kit. As with most things, you get what you pay for. So I’d suggest paying a bit more for the versatility of more powerful constant lighting.

Oddly enough the opposite is also true, in that many constant light kits don’t offer enough power for low light situations.

The alternative would be to ensure that the light is as close to the subject as possible without getting into shot, or you’d have to remove the light afterwards in Photoshop.

Constant light can often be either too warm (tungsten light) or too cool (some LED panels and also some modelling lights on strobes). So make sure to read product reviews that mention the color temperature of the light.

However, many LED type constant lighting kits are fitted with both warm and cool color temperature light, which is convenient when shooting in different lighting conditions.

Because of the lower power, and the need for a slower shutter speed, you can’t freeze fast movement with continuous light.

Infographic of flash vs continuous light 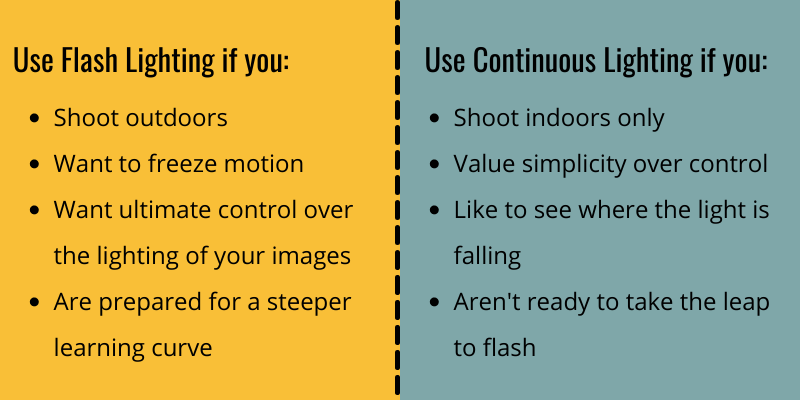 If you have any questions about flash vs continuous light, let us know in the comments.

Also, we love good news, so if our continuous lighting vs strobe tips have helped you to understand the kinds of lighting available and how they work, share that too.

How to create and use the Lightroom catalog in Lightroom Classic