One of the first posing tips to learn in portrait photography is that the closer something is to camera the bigger it will appear in an image. Foreshortening in photography is an aspect of this posing advice. A very important one, because foreshortening can lead to very unflattering portraits.

The good news is that it’s easily avoided, as you’ll see in the example poses below!

What is foreshortening in photography?

Foreshortening is actually not restricted just to photography, it’s also a drawing technique and can be used creatively.

So it’s definitely not always a bad thing.

Foreshortening is a form of depth distortion in photos as a side effect of transferring a three dimensional world to a two dimensional image.

However, in portrait photography, when foreshortening occurs unintentionally with a wrong pose or camera angle, the results are unflattering.

What causes foreshortening in photography?

In portrait photography it’s most commonly (but not always) seen in a subject’s limbs, because it makes them look shorter.

As mentioned, when capturing an image you create a 2 dimensional representation of a 3 dimensional world. In real life we can see all angles, but not in an image. So, according to Gestalt theory, our brains “fill in the gaps” of what we can’t see. Sometimes they get it wrong.

Further reading: Harness the power of Gestalt theory in photography

Foreshortening appears in an image where, for example, part of a limb is obscured by the angle of the limb in relation to the camera. There’s a perceived loss of distance between the end closest to the camera and the other end furthest from camera.

Unless we’ve met the subject in real life, we don’t know exactly what they look like, so we trust what we see in the image. However, it’s really easy to accidentally make limbs look shorter with foreshortening.

How to avoid foreshortening in posing

It’s actually quite easy to avoid accidental foreshortening, regardless of lens used, because it doesn’t rely on gear. It’s all about posing and perspective, specifically:

Yes, the foreshortening effect can be exaggerated by focal length, which is why it’s particularly important to be aware of where your subject is in the frame when using a wide angle. However, this article is specifically about posing tips to avoid foreshortening.

Foreshortening with body and camera angles

Foreshortening doesn’t occur just with limbs. It can be anything. 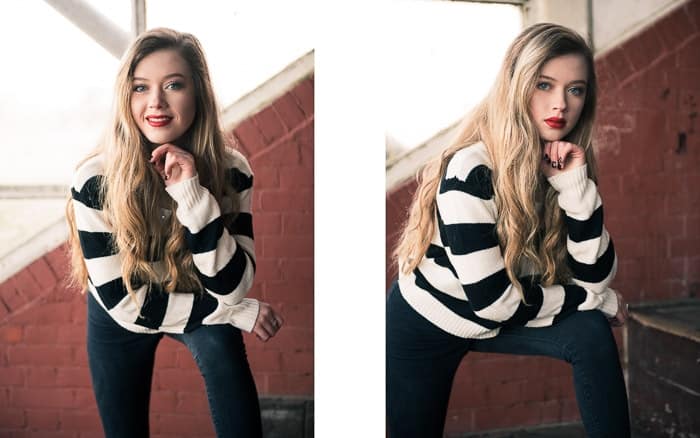 On the left the model’s body is foreshortened by her pose. Her legs look odd and her body very short and square. I’d asked her to rest her arm on her knee and lean forward towards me.

As you can see in the image on the right, by angling her even slightly side on to camera her body and leg aren’t foreshortened.

The easiest foreshortening mistake to make is with arms and legs, because just the slightest limb movement either makes or breaks the pose. 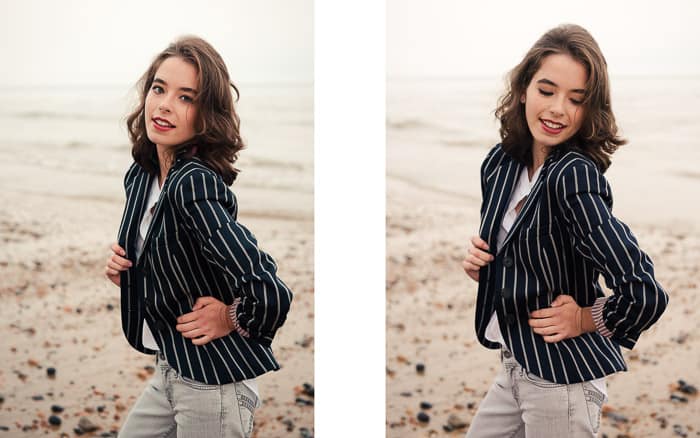 When a shoot is moving fast from one pose to the next you’re bound to get the odd mistake. There are two mistakes with the photo on the left.

The first posing mistake is her arm position. In the image on the left her forearm looks distorted, because of foreshortening. By moving her elbow back slightly and therefore not pointing to camera as much, her forearm is elongated as we can see more of it.

The other posing mistake is that her hand should not be flat on to camera, but that’s a different issue from foreshortening. I just thought I’d mention it, because it bugs me and I don’t want you to think that this is an ideal pose.

Speaking of elbows. Be very careful about an elbow pointing to camera. Do you see how she has a weird floaty arm coming out of nowhere in the image on the left?

Here again, in the image on the left her arm looks distorted. Maybe it wouldn’t be as noticeable if it weren’t featured next to a better pose on the right.

This proves my point that sometimes the smallest pose adjustment in portrait photography can make a huge difference.

Foreshortening posing tip in a nutshell

The more parallel arms and legs are to the camera plane, the less chance there’ll be of foreshortening limbs.

Foreshortening in photography is also a good thing

I may seem to be contradicting myself here, but like so many things in photography, when a technique is used intentionally, the effect is often good.

When used unintentionally it’s often incorrectly implemented, which results in a poor image.

Why is foreshortening used?

Foreshortening is actually a highly effective and creative composition technique when used correctly, because it’s a form of forced perspective.

Your camera sees the world differently from you, so take advantage of it. Part of the fun and creativity of photography is capturing the world as we don’t see it in real life.

Foreshortening in photography is a perfect example of this, as you can below.

Photo by Nick Jenkins on Unsplash

If you have any questions about foreshortening in photography, let us know in the comments.

Also, we love good news, so if these photography tips help you in your next portrait shoot, share that too.What

Capture a blurry background the easy way – no Photoshop