​I’m primarily a boudoir photographer, so for me posing women isn’t just about making them look better in photos, female poses are also about celebrating the female shape.

But female posing is just as much about body language.

So, with portrait photography for women, female poses are not just about creating a lovely shape, we’re also creating a message. And that adds so much more depth to an image than just a pretty shape. 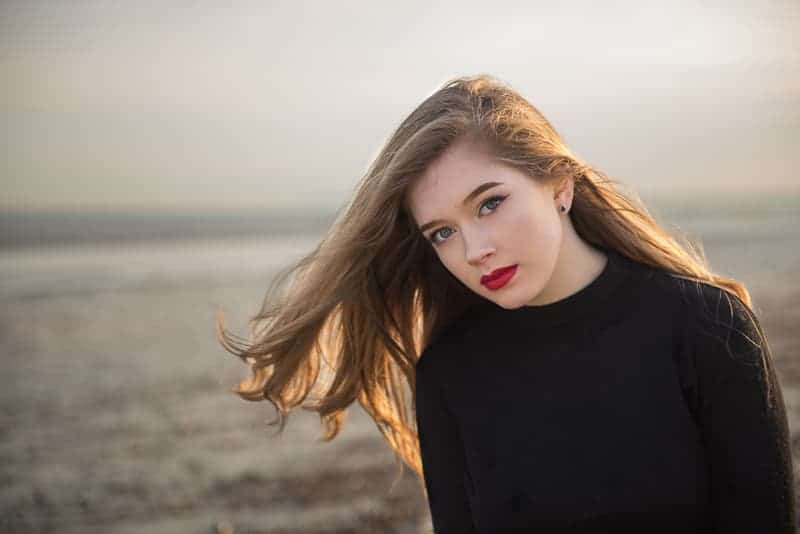 1. Accentuating and minimizing curves with posing

The golden rule to remember when photographing women is that whatever is closest to camera will be bigger.

It’s also why a woman’s hands shouldn’t be too far forward from her body towards camera. 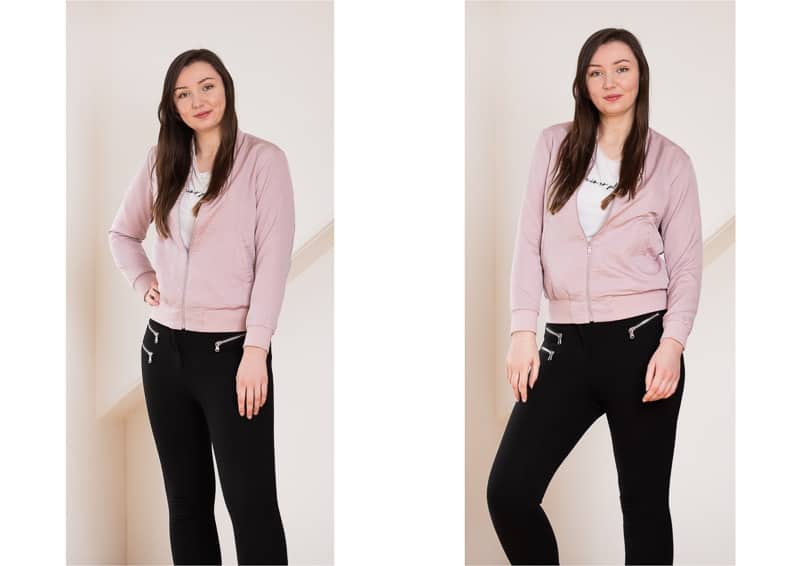 This is one of the first rules of posing women. Because women’s bodies have curves, bending limbs accentuates the curves. A quick flick through any fashion magazine will give you tons of examples of this popular technique for female modelling poses.

Bending the arms will highlight the curve:

Bending one leg and shifting her weight to the other leg will:

If she’s side on to camera it accentuates the feminine shape, because it: 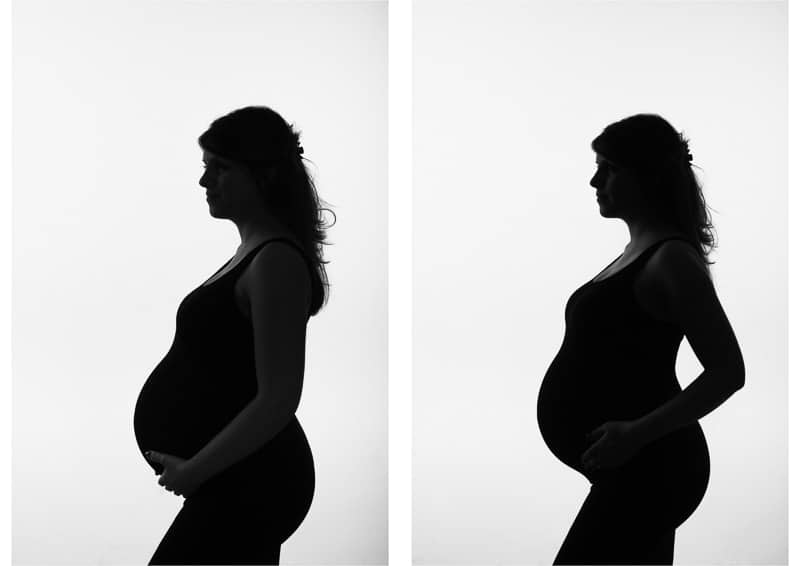 A hand placed on the hip of the bent leg carries the line of the leg further. So, not only does her arm accentuate her waist or back curve, but it also continues the line of her leg, which adds a pleasing flow to her shape and extends her leg. Plus when you compare the two photos you can see that by creating space between her arm and her back in the image on the right, she appears slimmer.

3. Female poses to create space between arm and body

This ties in with the previous tip for female posing. If you add the width of both your arms to the width of your body, you make yourself significantly bigger. So arms need to be away from the side of the body in photos.

This is why so often we see women pose with their hands on their hips. However, the space doesn’t need to be so big. I have two other ways of subtly creating space between arm and body. Ask her to: 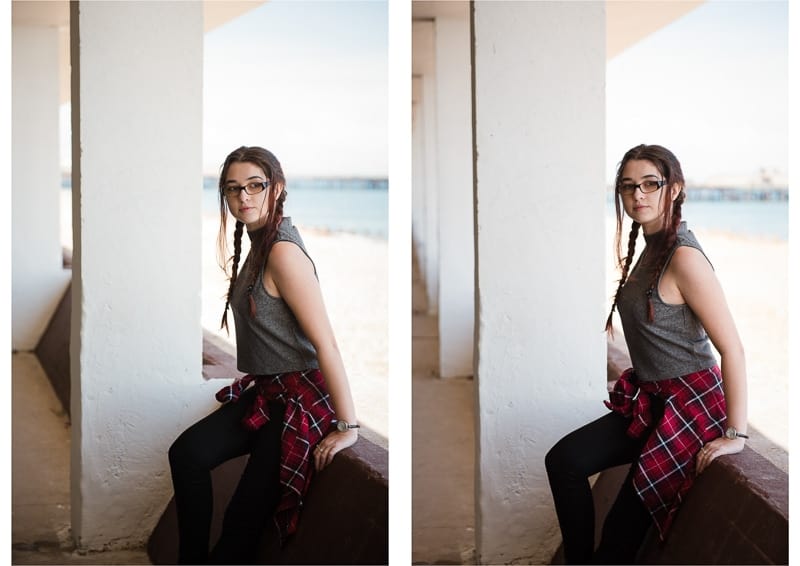 Whether front on or side on to camera, that small window of space between her waist and her elbow will do two things:

This works well for all body shapes, because posing women isn’t always to make them slimmer. Sometimes it’s to make a slim woman curvier. Portrait photography posing is all about how you adapt a concept to a particular body shape.

Watch out for foreshortening, because this will shorten body and limbs. It’s very easily fixed though with just a small adjustment to avoid these posing mistakes. 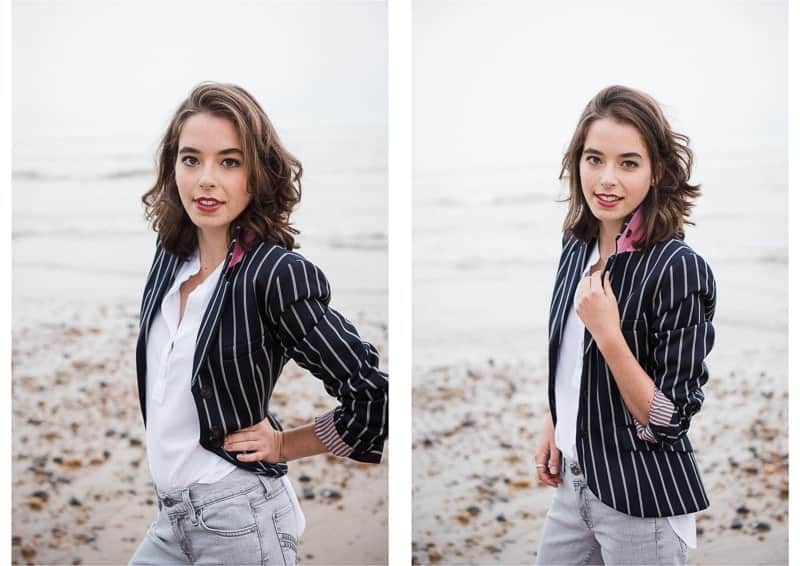 4. The magic of 45 degrees for female poses

Speaking of slimming angles, it’s often best to photograph a woman angled at 45 degrees to camera, rather than facing square on to camera.

At the 45 degree angle her width is greatly reduced.

5. The feminine S shape in posing

The beauty of the female form lies in the curves. So when photographing a woman, we need to make sure that we make the most of her curves, regardless of whether she’s standing, sitting or lying down.

The best way to do this is to think in terms of an S shape for great curves and apply the pose to the whole body. Because the shape is so distinctly feminine, when you photograph an S pose from the front, the side or even the back it’s flattering.

6. Female poses for defining the waist

There are a few tricks for creating an hourglass shape, or even just more of a waistline in slim women and minimizing a waistline on curvier women.

This female pose may seem to contradict the first tip, because we’re not creating space between arm and body…

However, we’re still not letting the arm just hang next to her body, which would make her body seem wider.

Instead, direct your subject to bring her arm across her body. This makes her shoulders wider than where her arm cuts across her body and so creates a slimmer waist.

It works particularly well for seated subjects facing to camera, because the waist is less obvious when sitting, but is also great for standing female poses.

If she’s not square on to camera, but standing at a 45 degree angle, it’s a great way of accentuating the curve at the small of the back, which in turn makes her waist slimmer and introduces an S curve.

When a woman looks confident, she feels great, so I love photographing women in a way that makes them look strong, confident and sometimes with a bit of attitude.

For this reason I very, very rarely photograph a woman looking up into the camera – it places the viewer in a dominant position and the subject in the submissive position.

Plus, there’s a better way to make double chins disappear – keep on reading!

It takes confidence to take up space, so big female poses that take up space automatically look confident. Get her arms up and away from the body, even above the head.

You don’t always need to bend everything to look good. There. I said it. Totally goes against the golden rule of female posing that “if it bends, bend it”. Well, a woman can be curvy, slim and stand strong all at the same time. Here’s how…

When you (male or female) plant your weight firmly on both feet, you look confident, sure of yourself. Just mentally scroll through all the images of superheroes you’ve ever seen to confirm this.

You just need to look sure of yourself, which is communicated with a strong stance.

So all we do is take that pose and angle it 45 degrees to camera with just her head turned straight to camera (like below).

Just the slightest adjustment to the angle of her head changes everything. You can cycle through several different looks with the smallest of head movements while holding the same pose. So I love playing with head tilts.

Not all head positions are about attitude. The angle of the head makes a huge difference to defining the jawline, even for women with already firm jawlines. For those of us who are carrying a little weight below our chins, the slightest movement of the head in the right direction will have the same effect as weeks of dieting!

This pose feels weird and looks a bit strange from the side, but it’s a great trick for men and women.

If she pushes her face towards the camera (the way a turtle would), she’ll have a more defined jawline. She’ll feel it in the back of her neck if she’s doing it right. 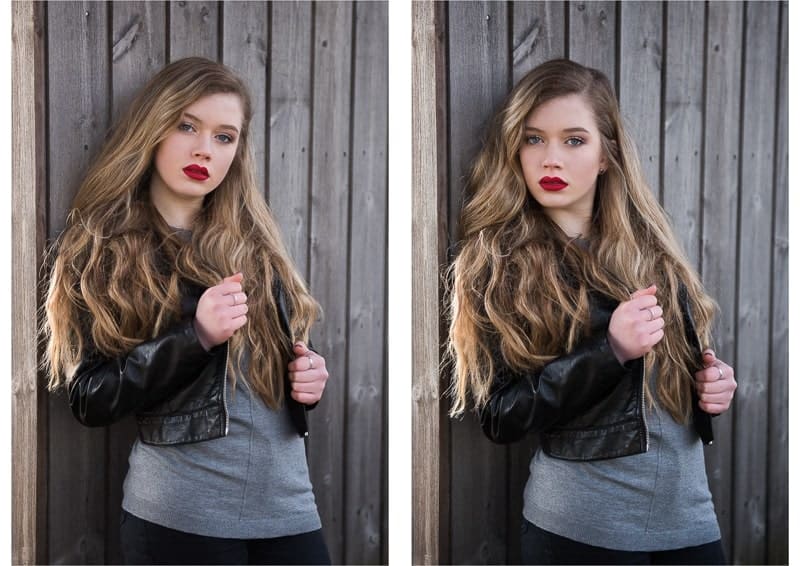 If you have any questions about portrait photography poses for women, let us know in the comments.

Also, I love good news, so if my female posing tips have shown you how to pose women in portraits, share that too.