Understanding direction of light: how to use front lighting 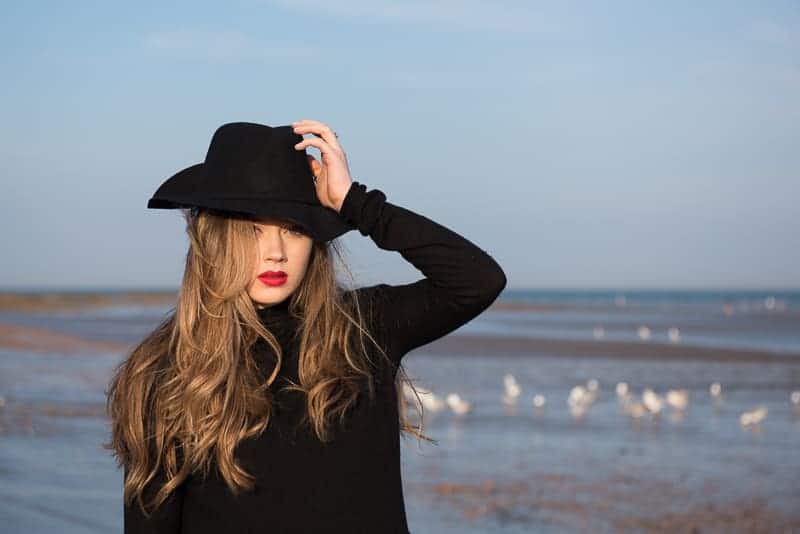 For the last part of our series on the direction of light we are taking a closer look at front light. More specifically:

What is front light?

Light shining onto the front of your subject is front light. It’s that straight forward. Knowing how light behaves and then learning how to use it is key to great photography. This is slightly less straight forward, but not difficult.

Whether you’re using natural light, or artificial light, such as speedlights or strobes in a studio, the same light direction traits apply. 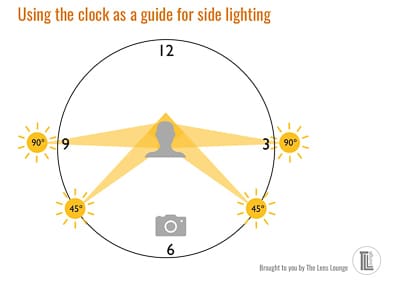 This post contains affiliate links. Buying something through one of the links won’t cost you anything extra, but we may get a small commission, which helps to keep the site running.

Lighting somebody directly from the front can be flattering on lines and blemishes. The reason for this is that the light is coming directly at the person’s face, so there are no shadows. This is referred to as flat light.

It’s very different when lighting from the side as the light skims across the surface of the subject, highlighting any and all textures.

Further reading:  Direction of light: how to use side light

Front lighting is not as dramatic as either side light or backlight, so can be a bit dull in comparison. Because there are minimal shadows, the form of your subject is not highlighted.

If used correctly in the right setting, I don’t see this so much as a pitfall, however, but rather as differentiation. After all, you don’t always want dramatic light with every shot. Sometimes you just want a nice, open, airy, light feel to a photo and we’re used to seeing the world this way. Not every subject needs drama. This is when front light is perfect.

3. How to use front light

Just because we’re lighting from the front doesn’t mean the image has to be dull or without form.

We can bring in some definition by having the light higher up, angled down towards the subject. The subject is still front lit, but the higher angle of the light causes shadows to fall downwards.

In portraiture the shadows fall under the subject’s nose and chin. This light pattern is known as butterfly lighting, often called beauty lighting. Check out the cover of almost any fashion magazine to see it in action.

Butterfly lighting is a win win situation – the light coming from the front is kind on lines, but because we have some shadow, it adds definition to the face.

Obviously, if you’re shooting with natural light, you can’t just move the light. You can, however, be aware of where the sun is in the sky and position your subject accordingly.

Just remember that when using front light, the sun will be shining directly into their eyes, which is uncomfortable, and they will struggle to keep their eyes open and look into the camera. 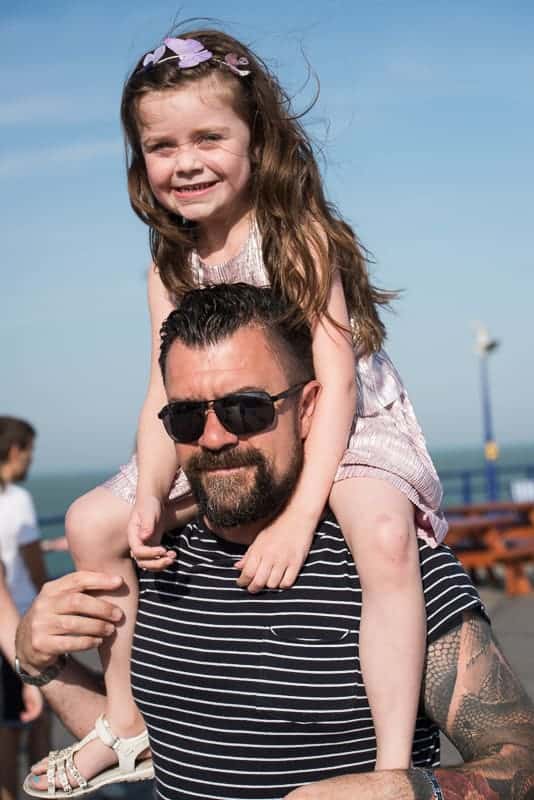 You can see the butterfly lighting pattern from the distinctive shadow under the girl’s nose. Shot late in the afternoon with the sun was behind me – natural light and no diffusion. 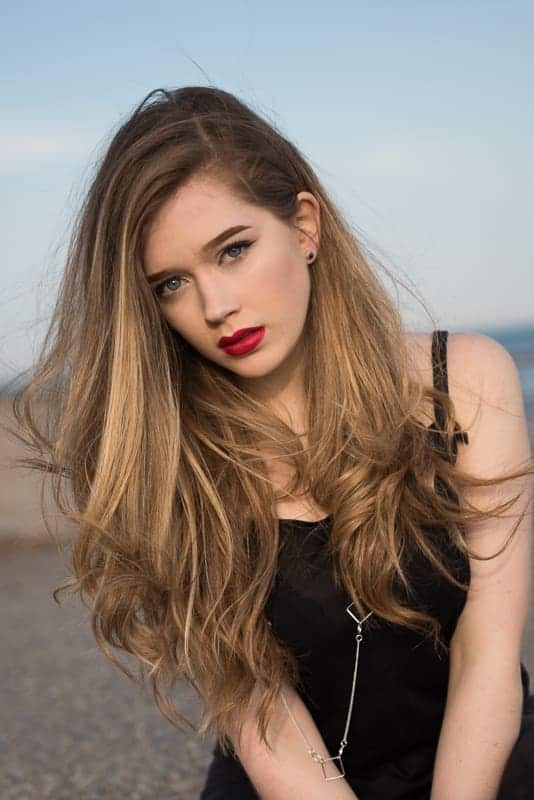 Shot with natural light and no diffusion. It was the golden hour, just before the sun sank below the horizon, but was still high enough to create the shadow beneath her chin, giving definition to her jawline.

If the sun is too high in the sky, the shadows can be ugly, and will ruin the image. The golden hour is a perfect example of the sun being in a great position. The sun works as backlight, side light and as front light, because of its low position in the sky (and great colors, but that’s another subject).

Further reading: Golden hour: what is it and why is it so amazing?

This leads to my next point about front lighting. Full sun, just like a speedlight or studio strobe, can benefit from a little light manipulation.

Diffusing front light softens the shadows it casts on your subject, making the light much more flattering when direct light is too harsh. There are two ways to manipulate light for portraiture:

You could create your own shade, by holding something between your subject and the light. How much light you allow through depends on the opacity of the object you’re using to block the light.

So you can completely block the light with a solid object, or diffuse the light by using a semi opaque object to block the light, but allow some of it through. Diffusing front light is the easiest way to control the amount of light on your subject.

For this reason, I would never photograph outdoors without bringing along a diffuser. Even if I’m not sure I’ll use it.

My motto is: rather have it and not use it than need it and not have it.

If you don’t have a diffuser with you, positioning your subjects in “open shade” is a great way of diffusing (softening) the light. An example of open shade is the shade underneath a tree.

Position your subject with their back towards the tree, facing the open in the direction of the sun. The light is still coming from the front, but it’s not hitting them directly, so the shadows are diffused and a lot softer.

When photographing indoors using artificial light, using a shoot through umbrella or softbox will diffuse the light before it reaches your subject.

I use Profoto studio lighting and accessories, but you don’t need to spend a fortune. Here are some reasonably priced shoot through umbrellas that would work with speed lights used off camera, as well as studio lighting.

I’ve recommended these ones in particular as they’re very versatile and I’ll mention, in a moment, the other use for umbrellas. Advantages of umbrellas:

Softboxes are another very effective way to to diffuse artificial light.

Every studio lighting brand has their own range of softboxes for diffused lighting. The size and shape of the softbox (or any light modifier) you use will determine the way the light behaves, which is why there are so many options available.

With these diffusers, you’re getting all the benefits of front light, without the harsh shadows that you may not want. 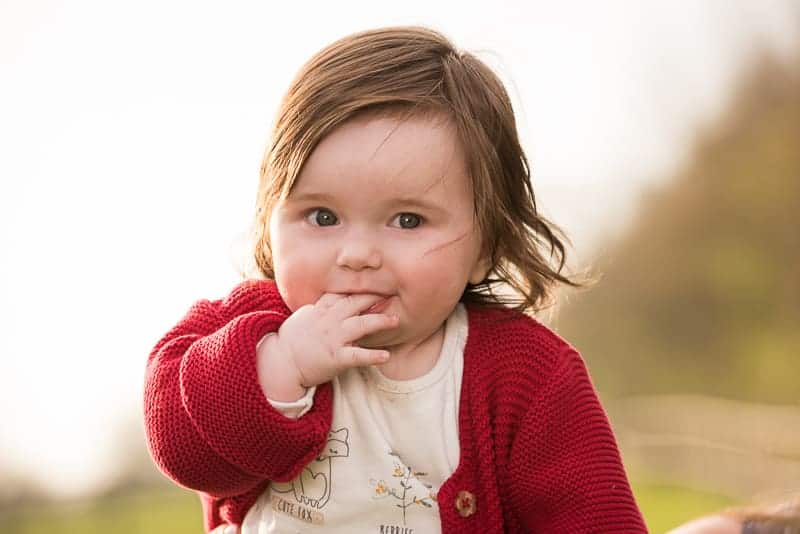 Here I used a combination of natural light (the late afternoon sun behind her) and artificial light (Profoto B1x) with a large umbrella (Profoto deep white umbrella – large), as well as a front diffusion panel for extra soft light to light her from the front

USEFUL TIP: The closer your subject is to the light, the softer the shadows will be.

You could also use reflected light to light your subject from the front. Light that is bounced, or reflected, off a surface onto your subject will be a lot softer than direct light.

If you’re outdoors using natural light, you would simply need to position your subject facing a white wall or reflective surface onto which the sun is shining. Alternatively, you could hold a reflector of some sort and angle the sunlight back onto your subject.

The reason I say “of some sort” is that you don’t necessarily have to buy a reflector. Anything that reflects light is a reflector. You could use a:

If you want an easy-to-pack and convenient to use solution, check out the reflectors I recommend below.

Using a flash you could aim your light at a reflective surface positioned to bounce the light back into your subject, for example, a:

When you use an umbrella to reflect light, you point your light into the umbrella to be reflected back to your subject.

This is not a shoot through umbrella, as mentioned before, but one with a with either white or sliver interior (and black exterior). To further diffuse the light, you could add a diffuser panel to the front of the umbrella, making it similar to a softbox.

Just be aware that if you’re using artificial light with natural light, you need to be careful with balancing the light, as a really strong fill flash can look artificial.

USEFUL TIP: The bigger your light modifier, the more diffused your light will be and the softer the shadows will be.

Two things to remember when using a reflective surface to front light your subject:

If you have any questions about using front light, let us know in the comments.

Also, we love good news, so if our direction of light tips have helped you to understand front lighting share that too.

How to take great photos in bad weather

How to use tonal contrast in photography

Understand the characteristics of light for consistently great photos

Does the left to right rule really matter in photography composition?

When, why and how to use exposure bracketing?

How to use framing as a really easy photography composition tool

Direction of light – how to use side light

Understanding direction of light: how to use front lighting

Will this photography tutorial help you to use front light?