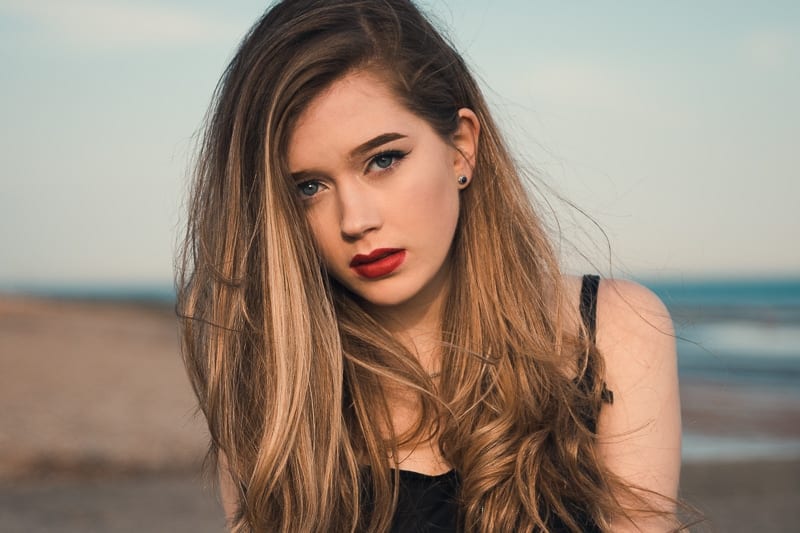 As soon as you can control exposure, the obsession with controlling light begins. This is after all what it’s all about – using light in photography and how to control light to achieve a certain look in photos.

To control, or modify light you either add, subtract or diffuse light. Regardless of whether you use artificial light or natural light, the same 4 techniques apply for controlling light with all types of photography: They are:

So let’s look at each method for modifying, or controlling light.

What is meant by reflection of light?

Reflection is one way to modify light by adding light to a scene.

When light hits a surface it’s reflected off the surface in the same way that a ball thrown at a wall bounces back off the wall.

When you stand in front of a wall and throw a ball directly at it, it will bounce back at you. However, if you throw the ball at the part of the wall that’s slightly to the side of you, it will bounce off in the other direction, rather than coming back at you.

Just like with the ball, reflecting light off of a surface is all about angles.

Use reflected light to fill in the shadows of an object by bouncing light from a reflective surface back into the shadow side. 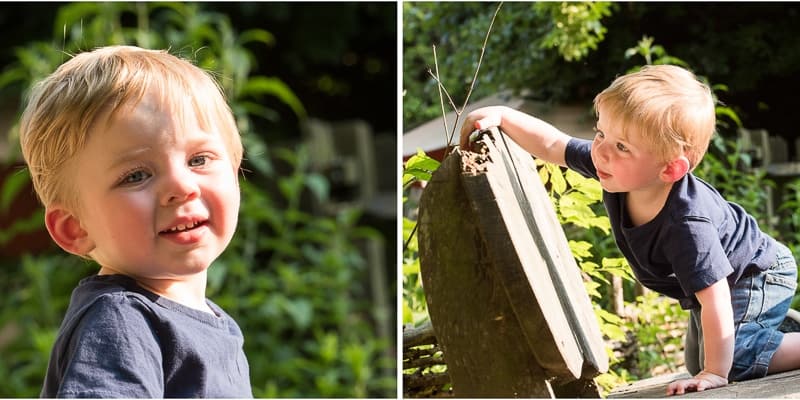 On the left he has his back to the bench backrest and you can see how direct sunlight on his face caused shadows. On the right he turned around and the reflected sunlight from the backrest lit his face evenly.

What can be used to reflect light?

Everything reflects light to some extent or another, but some surfaces reflect more light than others. The smoother and shinier the surface the more reflective it is.

That said, just because something is smooth and shiny, doesn’t mean it’s a good idea to use it to reflect light in photography. There are two factors to consider:

A mirror is of course extremely reflective – that is after all it’s job. So if you shine a light into a mirror, light is reflected back very strongly. If you’ve ever tried to shine a light through a closed window at night, you know that you won’t see anything but light coming back at you.

On the other hand, if you shine a light at a brick wall, it’s nowhere near as blinding. That’s because it has a rough surface, which doesn’t reflect light at sharply. It will, however, still reflect light, although less than glass or metal.

What colors are good reflectors?

Collapsable reflectors are cheap and lightweight, so make a great addition to your camera kit. There’s a big variety of reflectors on the market, but I’d recommend getting a 5 in 1 reflector, because it’s the most versatile and offer 5 different surfaces.

Three are for reflecting light, one is for absorbing light and one is for diffusing light:

I listed the reflective surfaces in the order that I use them most:

How the color of reflected light affects a photo

These three photos clearly show how the color of a reflective surface tinges the reflected light.

In the first image, because the watering can is really close to the boy’s face, the green color on his forehead is really strong where the reflected light is aimed.

In the second image, the watering can is further away, so the color cast isn’t as strong. Also, did you notice that the sides of his face aren’t so green? That’s because of the angle of the reflected light – it’s aimed mainly at the center(ish) of his forehead.

In the third image he’s back to being a normal little boy and not an alien. By lowering the watering can, it’s now in shadow, so not reflecting light back at him.

This is why when you photograph people, especially children (because they’re closer to the ground) on grass, they’ll look a bit green. The worst time is around midday on a sunny day. With the sun overhead, the light hits the grass and bounces straight back up.

How to use a reflector

In portrait photography, you should also be careful about where you place the reflector so that you don’t create unflattering shadows on your subject. 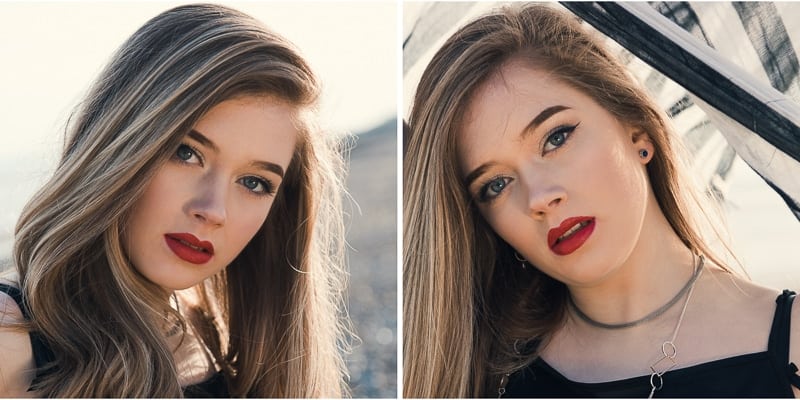 If you look at the catchlights in her eyes and the shadow cast by her nose you can see where the reflector was held. The photo on the left shows correct use of a reflector. On the right the reflector was held too low, so she’s lit from below, causing a shadow to go up from her nose, instead of across her cheek.

What is meant by absorption of light?

Absorption is one way of modifying light by reducing the light in a scene.

I mentioned earlier that the black surface of a 5 in 1 reflector is used for absorption of light. This is also known as negative fill, which is the opposite of fill light.

So, while the white, silver and gold surfaces are used to bounce light back into the shadow side of an object, when you use the black surface near an object it has the reverse effect.

We all know that when we leave something black in the sun it will be significantly hotter than a white object. The absorption of light in photography works on the same principle. 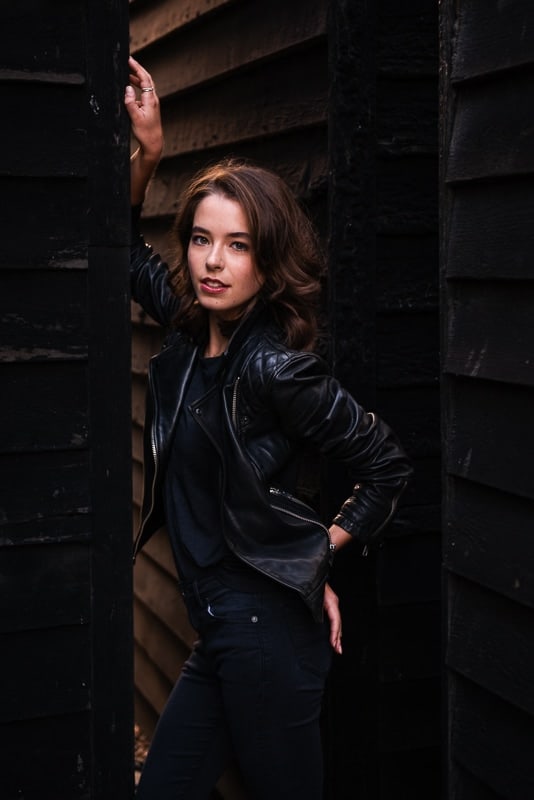 This was a very overcast day, so the light was very flat – not a shadow to be seen anywhere. By positioning my subject so close to black it created negative fill (see her right cheek on camera left), which increased the contrast.

What does a black reflector do?

A black surface absorbs light and will therefore deepen the shadows on an object. This is useful when you want to create more contrast in an image, especially if the light is flatter than you’d like.

Further reading:
How to use tonal contrast in photography
Flat light photography – how, when and why use it 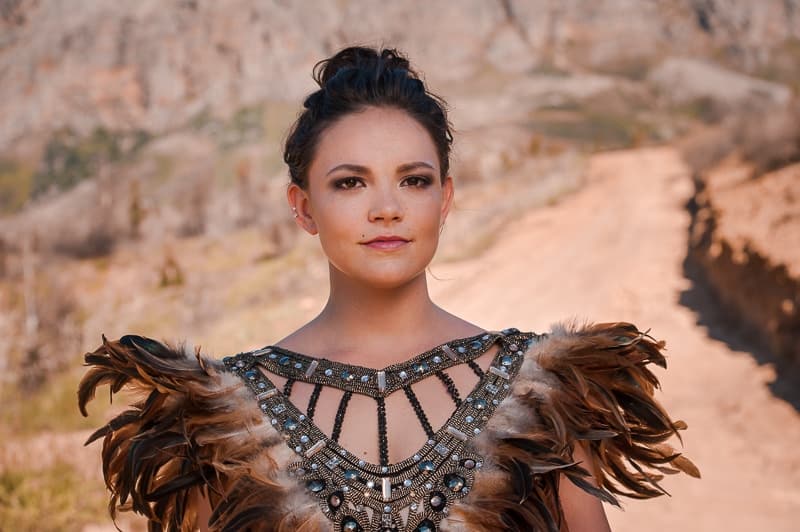 This shot is a great example of how not to use a black reflector.

The sun was almost directly overhead so I asked my assistant to hold the reflector above the model. I wasn’t paying attention and didn’t notice that the black side of my reflector was being used instead of the diffuser. You can see the negative fill on her shoulders. Also, because the sun is falling on the background, but not touching her at all, the background looks like it’s been added in afterwards.

What is diffused light in photography?

When light passes through an opaque surface, such as sheer curtains, it becomes diffused. The diffusing material makes the light scatter, so that it’s no longer a direct beam of light.

What is the purpose of a light diffuser?

On an overcast day your shadow is very soft and the edges are not clearly defined, because the cloud layer acts as a diffuser. Direct sunlight on the other hand will give you a much darker and clearly defined shadow.

So if you want to soften the shadows on your subject, diffuse the light by placing a diffuser between your subject and the light. 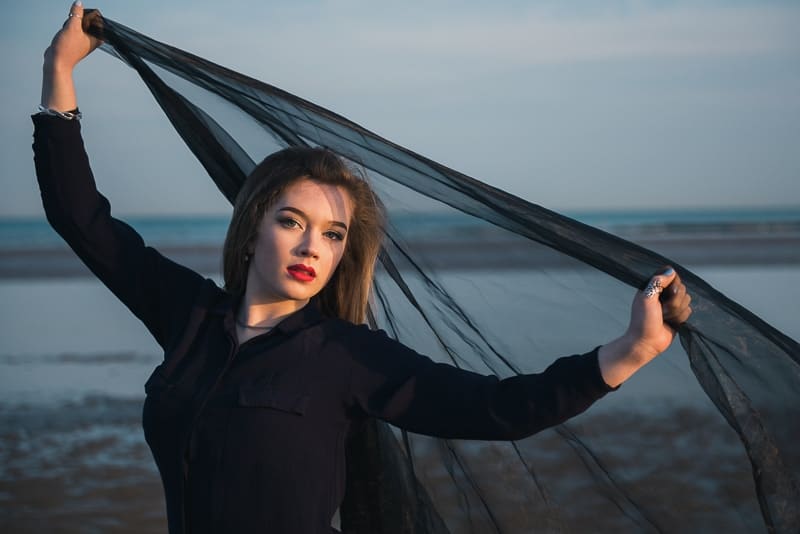 This photo is great for showing how different thicknesses of opaque material diffuse sunlight. The thicker the material, the darker the shadow.

How do you diffuse sunlight in photography?

Using the diffuser of a 5 in 1 reflector is one way to diffuse sunlight, but you don’t have to have an actual diffuser. Any material that allows some light through will work.

For example sheer curtains diffuse natural light entering a home. If the sun isn’t shining directly through the window, the diffusing effect of the sheer curtains is more obvious.

What is blocking in photography?

Another way to modify light by reducing it is to block light.

Objects used to block light in photography are called flags. 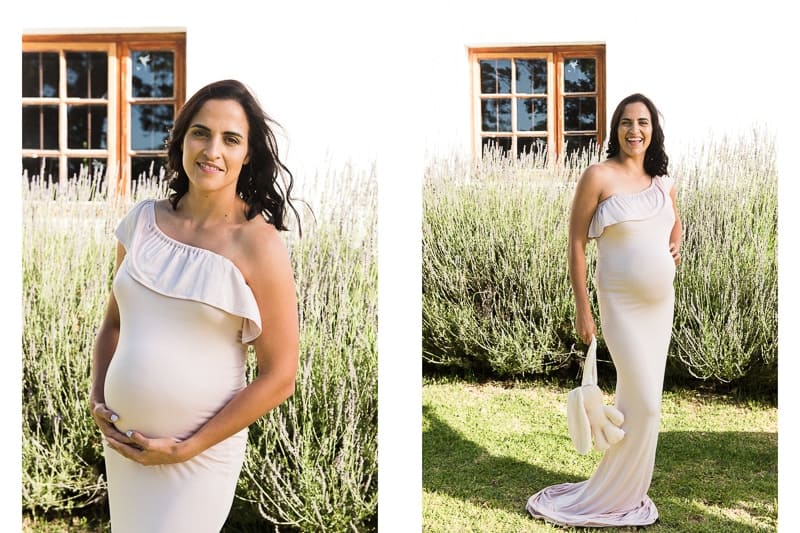 These images are straight out of camera to show how blocking light impacts an image. In the pull back shot on the right you can see my assistant’s shadow as she’s holding a flag up to keep sunlight off the subject.

If you have any questions about using light in photography, let us know in the comments.

Also, we love good news, so if our natural light photography tips have helped you to understand how to use light in photography, share that too.

Will this photography tutorial help you with using light in photography?

link to 8 tips for capturing eyes in photography - get vibrant, sharp eyes every time

The most important element for any portrait photographer to get right is eyes in photography. Our eyes are drawn to other eyes, because they speak to us and convey emotion. Even drawings of eyes...

Maternity photoshoot poses can be broken down into just four steps, or parts to consider. They are bump (of course), hand placement, leg position and head. Everything else flows from there. When...