Eyes are the most important part of a portrait, so not only must they be sharp, but they must be well lit to suit the emotion of the image. For this reason catchlights in photography are incredibly important.

So let’s take a closer look at what are catchlights and how do you create them? (It’s easier than you think.)

What are catchlights in photography?

Catchlights add sparkle and life to a portrait. So all eyes benefit from catchlights in photography, regardless of eye color.

In portrait photography and film catchlights in the eyes are eye lights, reflections in a subject’s eyes of the light source used to light the subject. 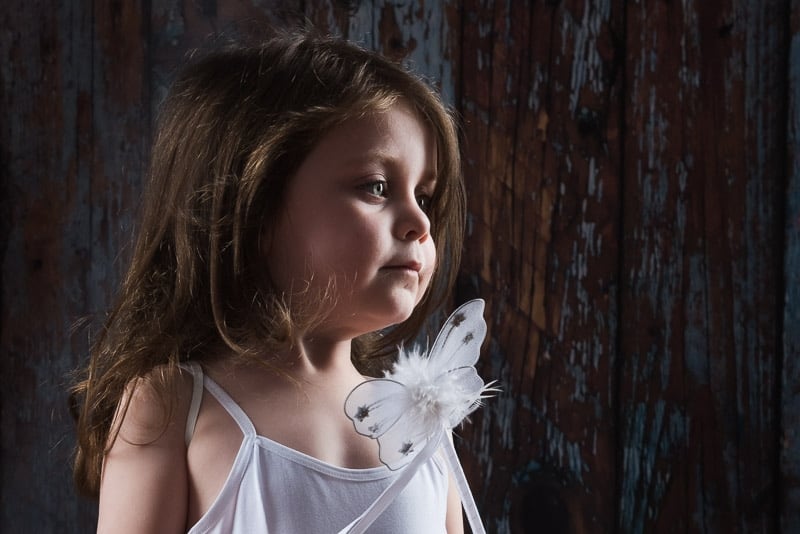 Why are catchlights in photos important?

Catchlights bring life to a subject’s eyes and make them stand out. They’re so vital that you’ll even see catchlights in the eyes of cartoon characters. Do a Google image search for Minions or your favourite Marvel character.

Unless your favourite character is a villain or a dark and moody character, like Batman. They mostly won’t be drawn with catchlights, which is a clue to why catchlights are important.

Catchlights add emotion, character and depth to a two dimensional image. In photography we’re always trying to make an image feel more three dimensional. How catchlights are used, or not used, has a huge impact.

The thing about catchlights is that we’re so used to seeing them every time we look at someone, that we don’t consciously notice them.

We do, however, realise that something isn’t quite right if we can’t see them, even if we don’t know why.

Examples of catchlights caused by the reflection of windows when photographing with natural light indoors.

How do you make catchlights in portraits?

Considering how important they are, making catchlights is surprisingly easy. As long as the light source is not behind your subject, you’ll create a catchlight.

When the light source is behind your subject, use a reflector in front of them to reflect some light back into their face and in the process you’ll create catchlights. In fact, any reflective or light colored surface anywhere in front of your subject will show up as catchlights.

But hang on a minute, there’s a catch (Pardon the pun. I really didn’t intend it.)

The two most important things about catchlights that you need to be intentional about are:

If you’re entering a portrait photography competition, the judges will more than likely be pedantic about three factors. They’ll want catchlights to be:

The reason for this is that they want catchlights to mimic the natural reflection of the sun in a subject’s eyes.

Well, there’s nothing creative or interesting about that! So, for the sake of this article, let’s relax the rules a bit…

Both of these are examples of bad lighting. They were taken in a wood on an overcast day with the sun behind the model. In the first photo no catchlights appear in her eyes. In the second photo she is lit from the front by a gold reflector held low down in front of her.

In portrait photography, outside of competitions, you should aim for catchlights to be in the top half of the eye. Ideally at 10, 11, 12, 1 or 2 o’clock.

This ties in with portrait lighting patterns.

If you recall at the top of this article I said that catchlights are just reflections of the light source. So, because of the position of the key light (main light), the catchlights will be at:

As an aside, if you’re trying to work out how a portrait was lit, study the catchlights in the subject’s eyes. Very often they will tell you everything you need to know about size, shape, position and type of light used.

If you use a fill light it might also be reflected in the eye as a catchlight, resulting in 2 catchlights per eye. Although I’ve done it myself, I agree that this can be a little distracting, which is why competition judges don’t like it.

However, you can minimize the appearance of the fill light with careful positioning and in the worst case scenario, you can remove the fill light catchlight in post production.

The only time catchlights should be in the lower half of the eye is when portraying your subject as a villain. It’s also okay not to have any catchlights in a villain’s eyes, or if the feeling of the image is dark, sad or depressing – emotions that are ideally suited to lifeless eyes.

It’s a tongue in cheek term that refers to lighting a subject from below the chin. You shouldn’t do it, unless you want to create a villainous look, just like you would when holding a torch below your chin to tell a ghost story around the campfire.

Well, the reason catchlights for villains appear in the lower half of the eye is because they’re lit from below! Monster lighting.

So, as you can see, the position of catchlights in photography is directly related to where the light is coming from, regardless of whether it’s natural light or flash (more on that in a moment).

Photographed in front of a large window with indirect light. Notice how the catchlights change position as she moves her head.

Shape of the catchlight in the eye

What you use to light your subject affects the shape of the catchlight in photography, because it’s a reflection of the light source.

If you want to create an alien or cat like eye, use a thin strip of light vertically. The catchlight will be a weird vertical line in the eye.

Size of the catchlight in the eye

If you want the catchlights to be a feature of the eyes, they need to be big, so the light source needs to be large and close to the subject.

Using flash for catchlights in photography

The great thing about using flash is that you have maximum control over your lighting, including the position, shape and size of catchlights.

So, getting back to our competition judges, for round catchlights use:

I’m not saying all portrait photography competitions have these rules, but many do and round catchlights are considered by many to be correct.

However, there’s one type of round catchlight that divides opinion – ring light. To see what it looks like, examine the eyes of most beauty Youtubers and Instagrammers.

Photos by Ethan de Long on Unsplash. On the left showing a ring light and on the right the type of catchlights ring lights create.

For rectangular catchlights in photography use:

Although the sun is large (obvs), it’s far away. So when it comes to photography, it’s considered a small light source and catchlights that reflect the sun will be small. However, that’s when placing your subject in direct sunlight.

To create large catchlights with natural light, simply position your subject in open shade. The light will appear as a large catchlight in their eyes. For example, when positioning the subject:

On the left she is turned so that some light spills over her cheek from behind and the sky is reflected in her eyes. On the right she is backlit by the sun and a reflector from the front and to camera left.

Using a reflector for catchlights

Catchlights are easy if your subject is facing the light, but what about when the light is behind them?

Wearing a white shirt when photographing close to your subject could also act as a reflector and will be visible in their eyes as a catchlight.

How to practice creating and controlling catchlights

The next time you’re brushing your teeth, take a close look at your eyes and move your head around while checking how the catchlights from the bathroom lights change.

Or a more scientific approach…

Any reflective, curved surface will have the same characteristics as an eye for the purpose of practicing catchlights, such as a:

Hold your “practice eye” up to a window and move it around to see how the catchlights change.

Or use a flashlight and move it around the “practice eye”. If you fold tracing paper into different shapes (round or rectangular) over the front of the flashlight you’ll see how the shape of the catchlight changes.

How to add catchlights in Lightroom

Before we get into how to create fake catchlights, my advice is to try to get it right in camera using the catchlight photography tips above to light the eyes.

That said, creating catchlights in post processing software like Photoshop or Lightroom is actually really easy. Lightroom is also great for accentuating any catchlights that might already exist in your photo to make the eyes really stand out. Just be careful not to over edit the eyes.

If you just want to enhance an existing catchlight in the eye your settings won’t need to be as high as if you want to create a fake catchlight.

Tips for capturing eyes in photos

If you’ve made it this far, I think you’ll find this article on photographing eyes in portraits interesting too – it’ll help you capture and edit eyes.

If you have any questions about catchlights in photography, let us know in the comments.

Also, we love good news, so if these photography tips help you to create catchlights in eyes, share that too.