The exposure triangle and ISO

It’s as important as being able to focus. Once you’ve mastered exposure and focus, you can start thinking about composition and getting creative with light.

The crazy thing is that once you understand exposure, it just seems so obvious, but wrapping your head around it can be a challenge.

Don’t worry, you’re not alone. Anyone who has ever mastered photography has gone through what you’re going through.

You will get this. 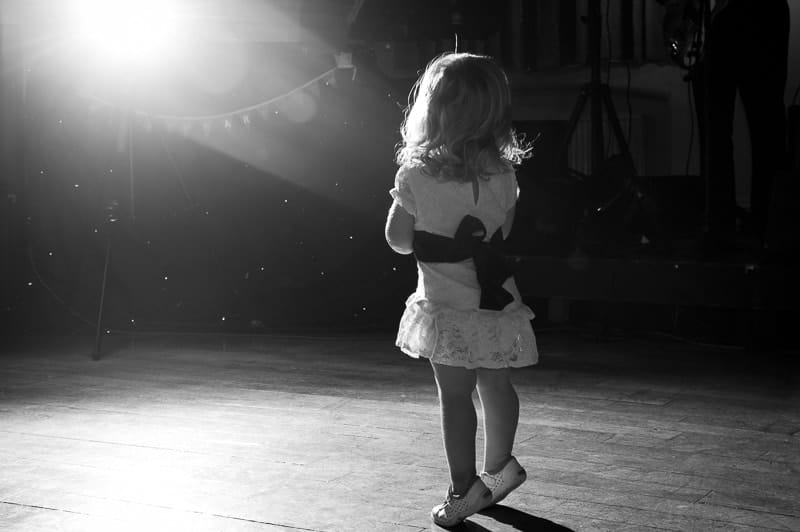 What is the exposure triangle?

So, to start with, what exactly is this exposure triangle that you keep hearing about? The exposure triangle is a concept that helps new photographers understand the factors involved in exposure. It’s a combination of three settings:

We cover each of these elements separately in different tutorials, because they’re that important.

The Exposure Triangle – what role does aperture play?

The Exposure Triangle – why is it so important to know?

How ISO fits into the exposure triangle 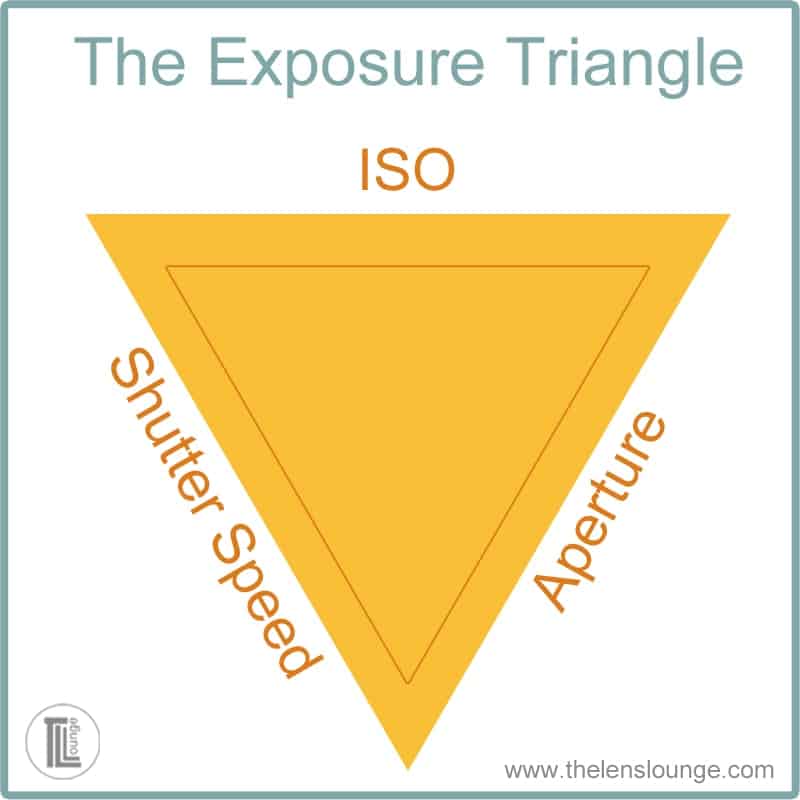 Photographers used to have to decide on ISO when they decided what roll of film to put in the camera, and then shoot the next 24 or 36 shots at that ISO – i.e. until the roll of film was finished.

Now, with digital cameras, we can change ISO for every shot if we want.

I think the ability to change ISO so easily is what has added to the confusion. Too much choice can make a decision difficult. I take forever to make up my mind when we go to a restaurant that offers a large and varied menu.

What happens when you adjust ISO?

In a digital camera the sensor has replaced film as the element that captures light and converts it to an image. So, when you adjust the ISO you’re adjusting the sensitivity of the sensor to the light. A higher ISO of say 400 will be more sensitive to light than an ISO of 200.

What does that mean?

If you have a car with headlights that come on automatically, you’ll have noticed that sometimes the headlights come on when it doesn’t seem necessary. The sensor has picked up that the light is below a certain level. If you’re in the UK, where winter is grey and dark, you’ll definitely have experienced this.

Your eyes can adapt to low light conditions to see better, but sensors can’t.

Even though you can see just as well indoors as you can outdoors, your camera can’t without changing settings. In auto mode, your camera will automatically adjust. In manual mode you must make the adjustment to enable your camera to capture more light.

One method is to “bump up” your ISO, in other words, increase ISO sensitivity.

My eyes are really light sensitive, so I always wear sunglasses when out and about. Dropping down the ISO is like putting a pair of sunglasses on your camera. 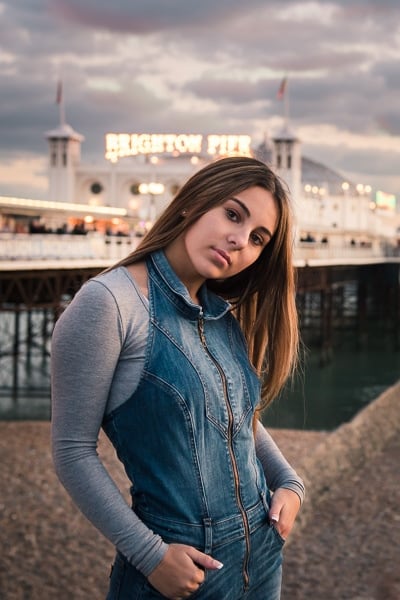 This was taken after sunset with natural light. I set a high(ish) ISO of 800, because of the low light conditions.

I say starting point, because nothing about light is definite. Every day is different and the light strength differs at different times of the day.

So an ISO of 400 might work now, but an hour from now something might have changed. There might be a few clouds in the sky. There’ll be less light and, if you want to keep aperture and shutter speed the same, you might need to change your ISO to 640 or more.

Why not just set ISO to auto?

It seems to make sense that, if the camera needs to adjust to “see” better, then why not leave it to the camera to decide on what it needs and set your ISO to auto?

I’ll answer with a question. What if you’re taking a photograph of your child in a patch of sunlight on the sofa, and you want to capture the moment with deep shadows or bright highlights?

Like all auto settings, in auto ISO, the camera will want to average the exposure. In other words it’ll want to capture detail in the shadows, so won’t want them to be too dark. It won’t want to blow out highlights either, but would rather retain details.

You won’t have full control of the exposure when using auto ISO.

The most important skills you can learn as a photographer is the ability to:

Photography is all about light. Using shadows creatively is part of knowing how to use light.

Paying attention to the exposure triangle and making decisions about ISO, aperture and shutter speed will train you to judge the light.

However, with all that said, there is a time and place for using Auto ISO.

Further reading: Auto ISO – pros, cons and how to use it 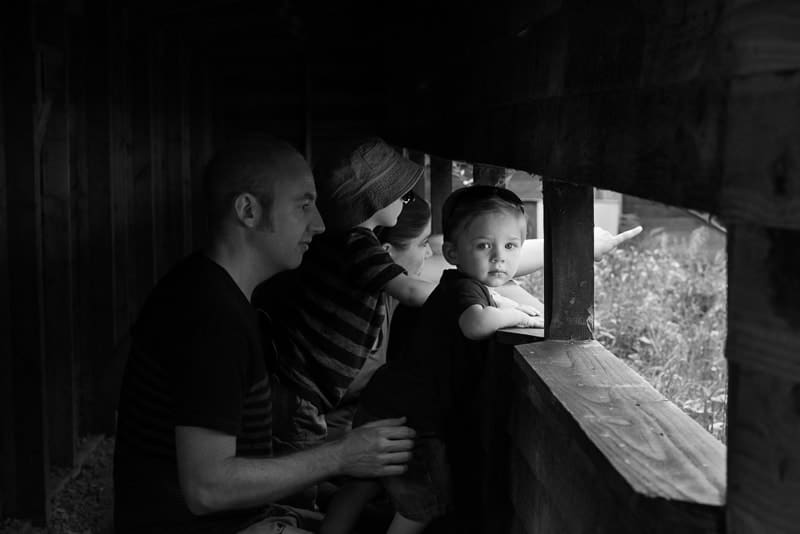 This moment in a bird hide could not have been captured so effectively in auto. The youngest child is the focal point of the image, so ensuring that he’s perfectly exposed draws the eye directly to him. The rest of the family is in shadow as they are not as close to the light.

What is noise in photography?

So, why not just set your ISO to 1200 and never worry about it again? Why all the faffing about with different ISO’s?

Well, that would be easy. But – you knew there would be a but – there’s a trade off with higher ISO settings. The trade off is noise.

If you’ve never heard of “noise” being associated with a photo, here’s a quick explanation…

In film photography we talk about an image being grainy. In other words, it’s kind of rough looking. No smooth, deep blacks or crisp, clean whites. There’s a muddiness to the image.

There’s nothing wrong with noise, if that’s what you want. In fact, it’s a great creative element to use. It’s when you don’t want it that it’s a problem.

Further reading: How to avoid and reduce image noise in photography

Photography is all about control. Before you take the shot you decide what you want. Then you set your camera and go for it. Again, this all comes down to the exposure triangle.

You see how important that triangle concept is?

Maybe your subject matter is gritty and edgy and you want to noise to add to the mood. On the other hand, maybe you want your image to be as sleek as possible, so you want absolutely no noise.

In order to achieve the result you want, you need to control your ISO.

It works exactly the same way as your sound system – turn it up for more noise.

This isn’t a subject matter than commands grit or edginess. It’s a baby – beautiful and new – so we want a sleek, smooth image with a good amount of light.

We want a low ISO.

What are you going to do? 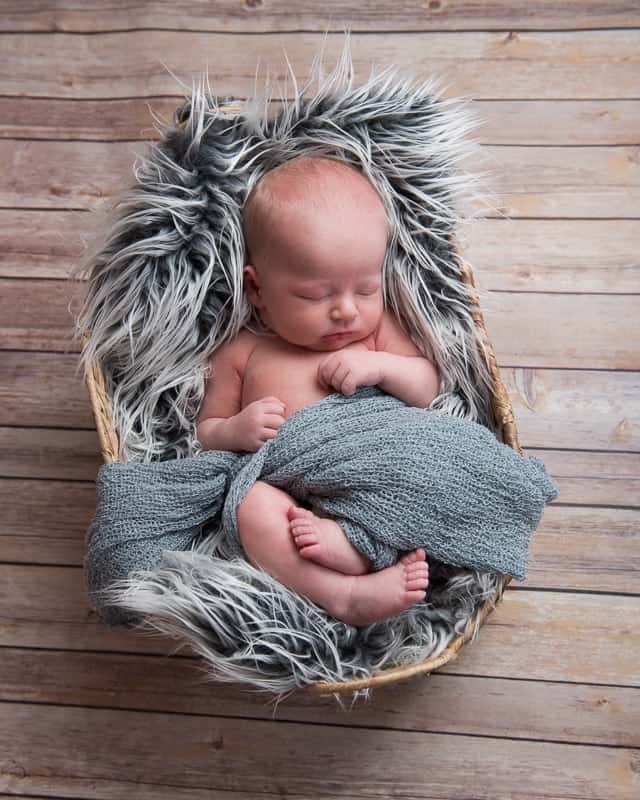 Let’s sidetrack for a moment

At The Lens Lounge we do not encourage you to spend on camera gear in the hopes of becoming a better photographer. We say work with what you’ve got, master what you’ve got. If you then find that your equipment is limiting you, upgrade. Only then.

You’ll learn so much more by working within the parameters of your equipment.

So, bearing in mind that you shouldn’t upgrade your equipment until it’s absolutely necessary…

One of the reasons why the top of the range cameras cost so much is because of their sensors. The technology in these cameras is quite staggering. They’re complex and optimised to handle low light situations far better than cameras lower down in the range.

What this means is that the camera you use will have an impact on your decision.

In our example scene we’re lucky:

So far so good.

But where in the room is the baby? Is it near a window, or on the opposite side of the room from the window?

The further you are from a window, the darker the room becomes, because there’s less available light.

Further reading: What are stops in photography exposure?

Let’s say the baby is near the wall opposite the window. This isn’t ideal, but for the sake of this exercise let’s say we don’t want to wake the baby by moving it, so we have no choice.

We have to bump up our ISO or the photo will be underexposed. Remember, we’ve already set our aperture and shutter speed to what we want/need for the available light, so the only thing left to adjust is the ISO.

Now you say, well that’s okay, I’ll leave the ISO low, because I’ll just brighten the photo afterwards on the computer. Here’s the catch with that…

Why brightening an image on the computer is not ideal

When you underexpose a photo and then adjust it in Lightroom or Photoshop, or whatever software you use, you’ll lose image quality.

The more you have to use your software’s exposure tool to brighten an image, the more the quality will be affected. I’m not talking about minor adjustments. I mean when you look at a photo and it’s just so dark that you really have to brighten it.

In this instance noise from using a high ISO is far less than noise that’s introduced when brightening an underexposed image in post.

When you’re taking the shot you have the opportunity to get it right, so why not just do that? I’m a huge fan of actually taking photographs, rather than spending hours on the computer.

Luckily babies are easy to move, and this one is fast asleep in a basket, so we’re going to move baby closer to the light, set our ISO low and capture gorgeous, noise-free images. 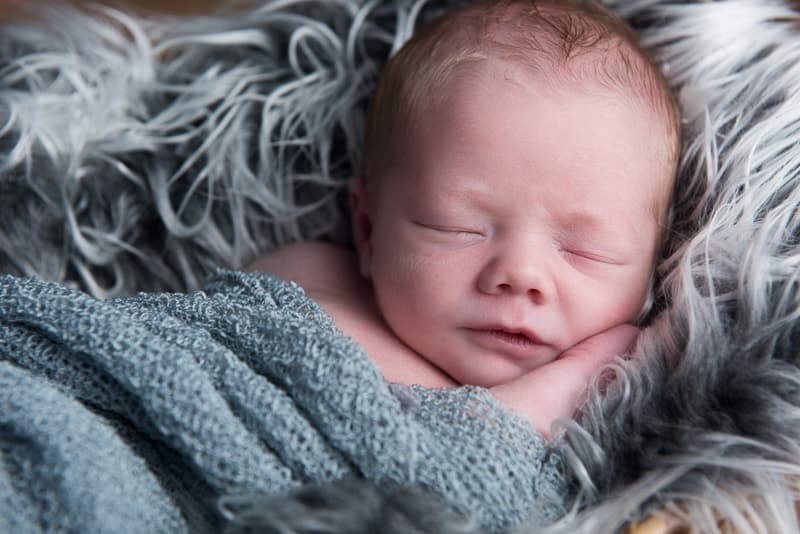 If you’re struggling to understand what is ISO and how to use it, you can be sure that many others are struggling too. Share your experiences, your questions about the exposure triangle and ISO below and we’ll give you some help.

Share your successes and I’ll give you a high five for persevering!

If this tutorial has helped you to understand what ISO is for, share that too – I love good news!

5 hard light photography tips you need to know, plus pros and cons

5 types of rhythm photography for composition that sings