The rule of thirds is one of the first composition techniques new photographers learn once they’ve figured out how to get sharp focus. I’ve written about the rule of thirds in detail before and said then that I’d write a follow up article on the importance of the intersections of the thirds grid.

Well, this is that article, but with lots of examples of the rule of thirds in photography, because as we all know, a photo says so much more than words. And in less time too!

We’re taking it to the next level.

Why use the Rule of Thirds?

Before we get into examples of the rule of thirds in photography, let’s quickly go over what’s involved.

Firstly, just because “rule” is part of the name of the Rule of Thirds, doesn’t mean that every single photo needs to be composed using the rule of thirds. Definitely not. It’s not a strict rule, merely a guide to creating more compelling images.

In fact, a very good time to break the rule of thirds is when you want to highlight a message in a photo. 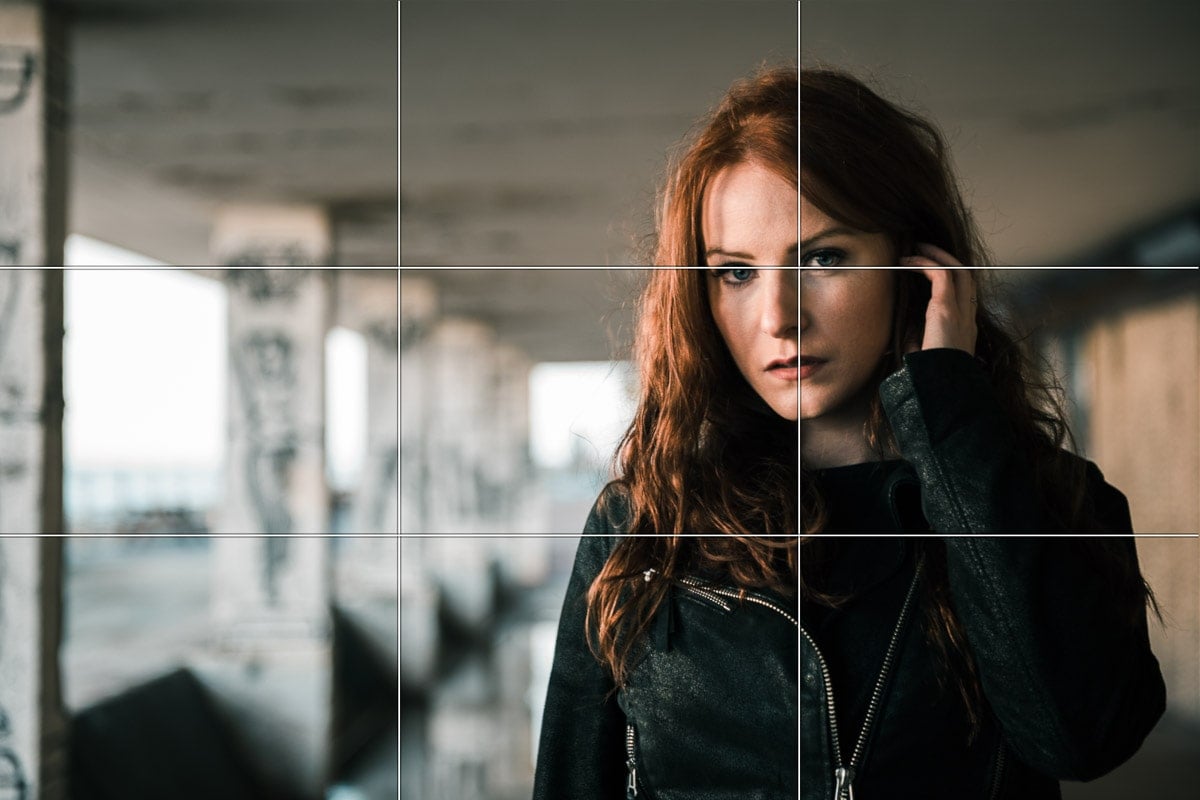 Because the rule of thirds helps us to establish balance in an image, when we specifically break the rule, it creates imbalance. In photography imbalance equates to discomfort, or tension. So:

Beginner photographers tend to place their main focal point dead center, which is usually an uninspiring composition. Our eyes need to travel over a photo to be interested, so using the rule of thirds is a better composition technique.

How to use the Rule of Thirds

The basis of the rule of thirds is that an image is divided into 9 equal blocks by 4 lines that create a grid. Rather than place the subject in the center of the frame, it’s more pleasing on the eye for them to be off-center on one of the four intersecting points.

The rule of thirds grid is the most commonly used form of off-center composition.

It’s used that often that most digital cameras have a rule of thirds grid overlay to help with composition. Many editing programs, such as Lightroom, also have a thirds grid crop overlay.

All these images are actually screenshots of my photos in Lightroom with the crop tool on to show the rule of thirds overlay.

So, if you can, adjust your composition by using the crop tool.

The grid is created by 2 equally spaced horizontal lines and 2 equally spaced vertical lines – like a tic-tac-toe board. Think of the intersection of the lines as power points. This is where we tend to look first in an image.

Where the grid lines intersect is where you place your main subject. The viewer’s eye will naturally go to a point of interest in an image. Lining points of interest up on the intersections of the rule of thirds grid lines makes the pull to the main subject even stronger. It tells the viewer that this is the subject.

The left side of the grid holds more power to draw our attention than the right side, and the top more than the bottom. So the:

If a secondary point of interest is on the opposite intersection, balance is created. It also helps the viewer’s eye to travel from the main subject to this second element.

Further reading: Why the rule of space is so powerful in photography composition

Horizontal lines of the rule of thirds

For headshots the subject’s eyes should be on the top horizontal line. This allows enough space above them in the frame. It also places the most important part of a portrait, the eyes, where the viewer will look.

For portraits a little further away where more of the subject’s body is visible, the eye closest to camera should be on the top left or top right grid intersection. 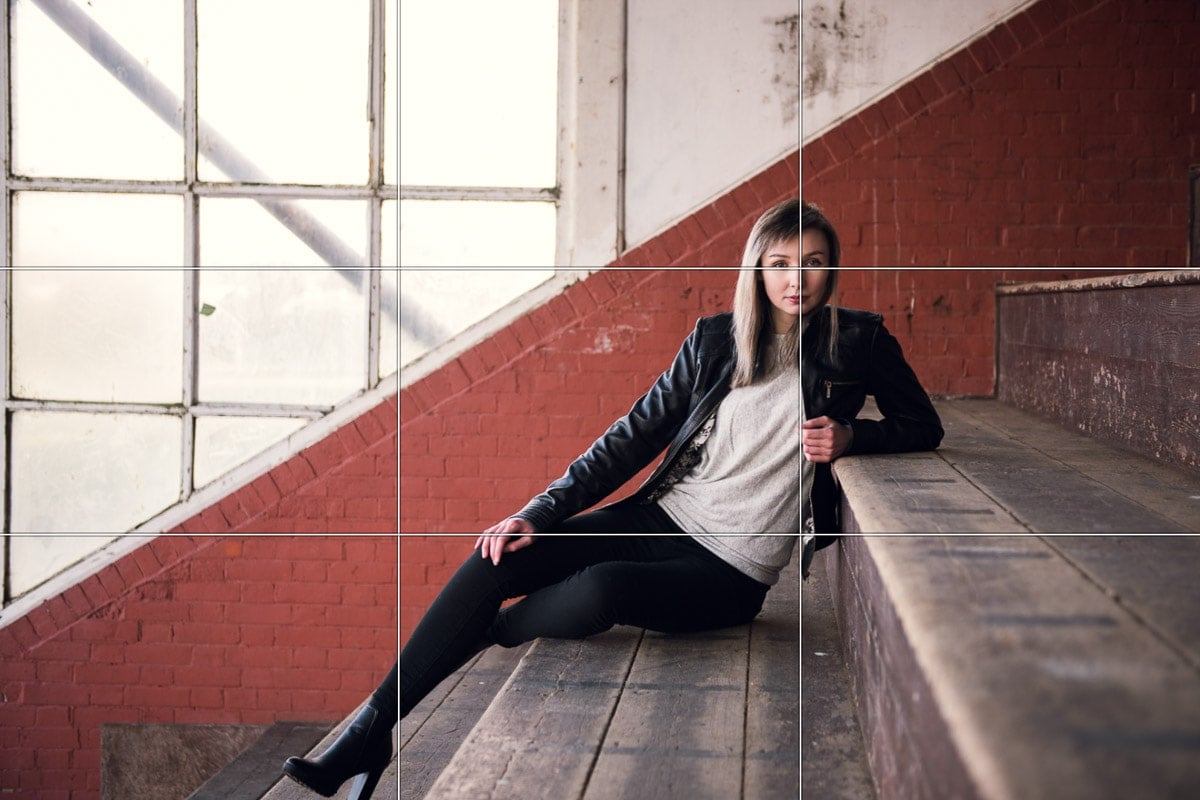 Vertical lines of the rule of thirds

For harmonious full body photos the subject should be placed on the left or right vertical lines looking into the frame.

But bear in mind another compositional rule – the left to right rule.

This rule states that when there’s movement in an image, like a cyclist whizzing through the frame, that it should be from left to right. Because that’s how most cultures read – left to right. This is slightly controversial, because it doesn’t bear in mind cultures that don’t read from left to right or from top to bottom.

Further reading: Does the left to right rule really matter in photography composition?

Likewise top to bottom. Unless you’re photographing a rocket taking off of course. That absolutely should be going from bottom to top of frame if all is going well!

Harmony vs tension using the rule of thirds

To really ramp up the tension, have your subject looking out of frame. So if placed on the left vertical, they should look to the left, out of shot.

That’s a double dose of tension, because the subject’s eyes will direct the viewer to the left, rather than moving to through the image from the subject in the left to the negative space, or secondary point of interest, on the right.

Further reading: How to use negative space photography composition effectively

Examples of the rule of thirds in photography

Now let’s take a look at the rule of thirds examples in action.

This first example is a trick one for you to work out – answer at the end. 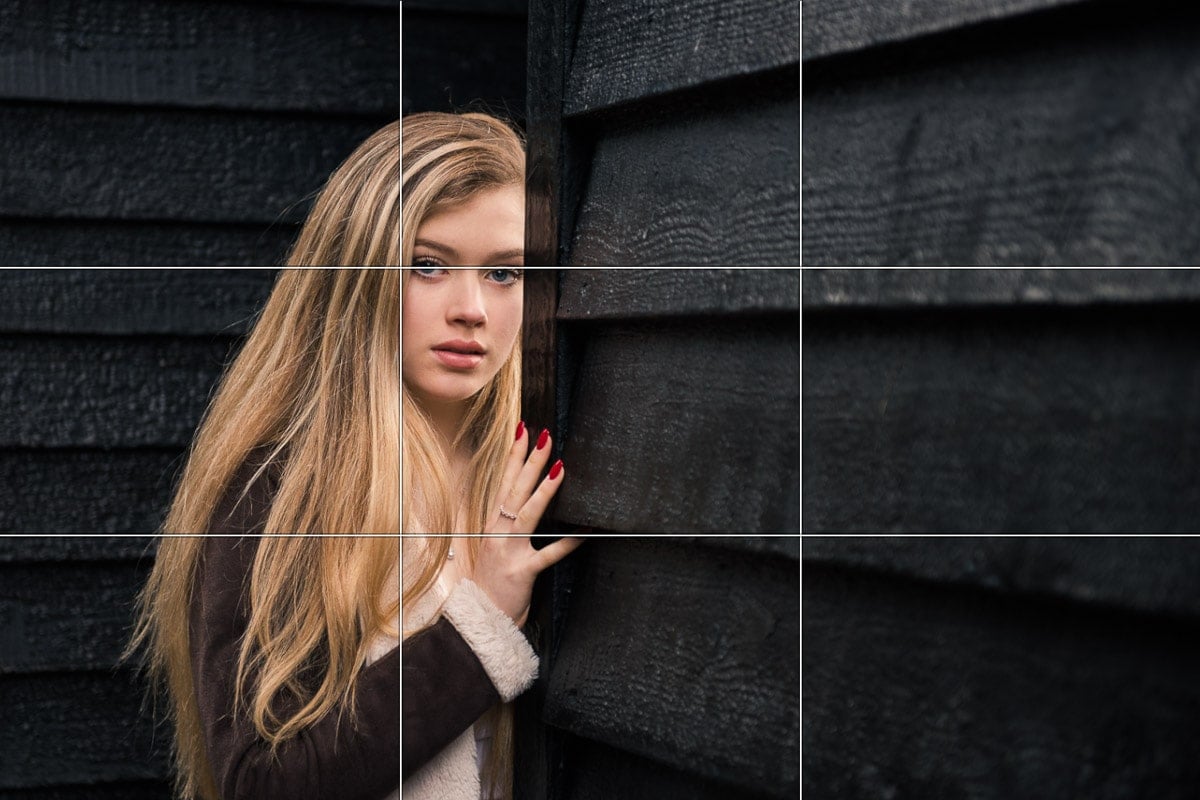 Using the top horizontal line on the grid

You don’t have to stick to the rule of thirds grid exactly. Placing a subject with their eyes on the upper horizontal line gives them room to breathe in the image while allowing a little creative leeway in the photo’s composition.

Placing points of interest on a secondary point in the thirds grid, strengthens the composition. Because our eyes are drawn to the intersections, it helps to direct the viewer to the other point of interest.

Using the rule of thirds for three quarter length portraits

Place the subject on either the left or right vertical line for three quarter and full body photos. In both these images I’ve also used leading lines to draw the viewer’s eye to the subject.

Breaking the rule of thirds to underline a message

You wouldn’t know this by looking at the photo, but this shoot was done on the last day of the year. When we arrived at the location the pillars had been modified from the previous time I’d been there (they’re constantly being changed). It was perfect that they were covered in graphics of clocks! So we used it as an element in the composition.

In addition to that it was a really stormy day. So the weather, the feeling of running of out time on the last day of the year and clocks in the background all added to the shoot and I wanted to capture that.

The answer to my trick question

Here’s that trick photo with the thirds grid overlay.

But, because I love puzzles, there’s more to the composition of this image, as you can see from the crop below. I’ve used a frame within a frame to draw attention to the subject. The beach and sea on the right is unused negative space.

Learn the rules so that you can have fun with your photography composition. They’re not there to restrict you. They’re there to help you discover new ways to frame your ideas. Literally.

If you have any questions about these examples of the rule of thirds, let us know in the comments.

Also, we love good news, so if our rule of thirds examples have helped your photography composition, share that too.

What is SOOC photography – SOOC vs edited – what’s better?

How to avoid shadows in indoor photography (on walls and backdrops)