Very often when photographing portraits outdoors the background dictates our choice of camera angles in photography. We might choose to shoot there because the background looks great and we want to ensure we include as much as possible. Or we might need to hide something in the background or even everything behind the subject.

That’s the practical side of camera angles.

So, putting that consideration to one side, what was the camera angle you used in your last portrait photo? Why did you choose to photograph at that camera angle?

Or did you just lift your camera up to take the shot and not think about the impact of angles in photography?

This is often the case and it’s such a shame, because just a little bit of thought about using different camera angles could have made a big difference. 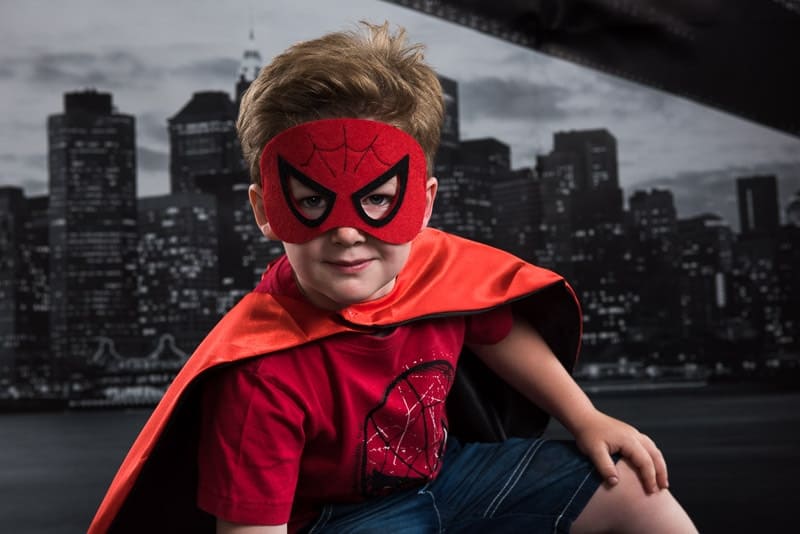 Why are angles important in photography?

When we don’t have a camera in our hand, we don’t think about how we’re viewing the world. Most of the time. We just go about our business.

We’ve spent a lifetime experiencing body language and personal space and we’re so familiar with it that we don’t even think about it.

This is why camera angles are important in photography. It’ translating into photos everything we know about the way humans interact with each other and the world.

Photography is a visual language.

Understanding camera angles is a crucial part of speaking the language well to communicate the message or feeling of a photo to the viewer.

It’s the psychological side of camera angles, which is what we’re looking at today.

What are the different types of camera angles?

Psychologically, there are three main camera angles in photography that impact a photo:

The logic of these camera angles in photography is applicable to all genres, but I’m specifically talking about it from a portrait photography point of view.

Your vertical camera angle options include photographing your subject:

1. Camera angle from below

When we photograph a subject from anywhere below so that they’re looking down at the camera, we elevate their dominance in the photo.

The lower the camera, the more dominant, and therefore powerful, the subject will appear in the photo.

People in positions of authority are photographed from below to communicate their position.

I use this camera angle a lot (most of the time actually), not to assert dominance of the subject, but to portray them as confident.

Face to face is generally how we see the world. Yes, some people are taller than others, so it’s all relative. However, a person photographed on the same level feels natural and how we expect to engage with others.

There’s no power play, making the subject and the viewer equal.

3. Camera angle from above

Photographing down on somebody puts the viewer in a position of dominance over the subject. For this reason you’ll never see a person in authority photographed from above. Actually, I shouldn’t say never, but if they are, they’re either making a statement or the photographer is not doing their job properly.

Women were traditionally photographed from slightly above. But the world has changed and this is no longer the case.

Except in the world of selfies, because people have realised that this is a good way to hide a double chin. But phone selfies and portrait photography are two very different things, so it doesn’t count. Plus there’s a much better way to slim the jawline with posing that doesn’t involve being photographed from above.

Peter Hurley does the best job demonstrating this in his YouTube video (click here to check it out).

Once you’ve chosen your vertical camera angle, you need to think about the other part of the message and how the horizontal camera angle will affect the image.

Do you want your subject to engage with the viewer or not?

We need to consider walking around our subject, or getting them to shift position, instead of always photographing directly from the front. To state the obvious, the other options are photographing from the side and from behind the subject. 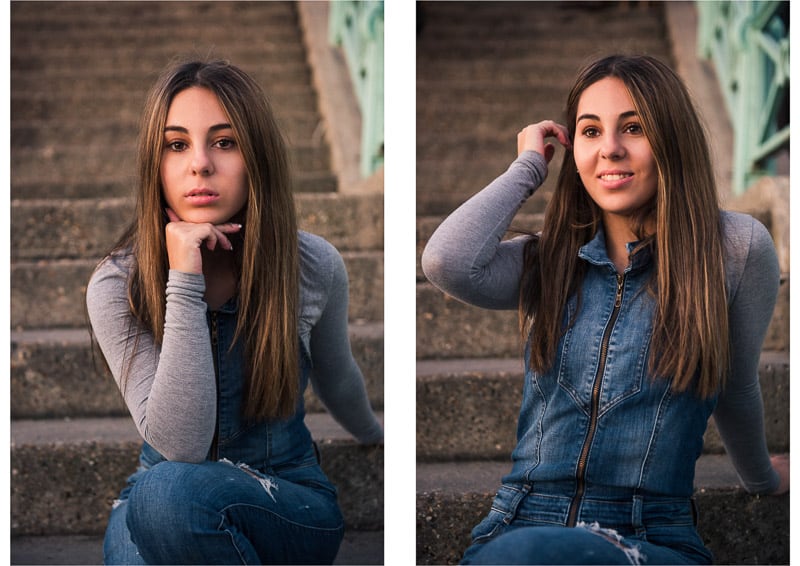 On the left she is facing the camera and looking straight down the lens, but on the right she changed position slightly so my camera angle is slightly to the side, plus she’s looking off camera.

The most engaging camera angle is when a subject is facing the camera front on.
But there’s more to it than that, because the feeling changes depending on whether a subject is:

Front on angle with subject looking off camera

When your subject is front on to camera, but looking off to the side somewhere, it creates interest. Humans are curious, so we want to know what the subject is looking at.

If you’re walking along and see somebody up ahead point up in the sky at something, you’ll look. You want to know what it is.

But it’s a bit more complicated than that.

When the subject is looking off camera, it not only piques the viewer’s interest, it also potentially also excludes them from the conversation.

You know those times when you’re standing in a group of three and the other two are chatting away together? You can feel a bit excluded.

I use this angle a lot with boudoir photography, because, the way I shoot, the photo isn’t about the viewer. It’s an intimate moment of a woman in her own thoughts. So it also introduces some mystery.

Front on angle with subject looking at the camera

Front on to camera is the most confrontational camera angle and is used more for men than for women. That said, I use it a lot for women too, because it portrays confidence.

Humans are wired to connect with the gaze of other humans and animals. If it has an eye, that’s what we (most of us) look at.

When your subject is front on to camera, looking straight down the lens, they connect strongly and directly with the viewer. So it’s a highly engaging camera angle.

It’s also why when people, or animals, are an out of focus blur in the background they shouldn’t be looking to camera. We can’t resist the pull of their gaze, which make it very distracting in a photo.

On the left, the viewer is completely disconnected from the subject, but on the right, because her face is not turned away so much we feel more connected.

If we change camera angles and move to the side of our subject while they continue to look directly ahead, it appears that they’re not aware of their photo being taken. As a result the viewer feels like a voyeur.

If they turn their head to look at the camera, it introduces tension to the pose, because they’re engaged but also not fully committed to your (the viewer’s) presence. 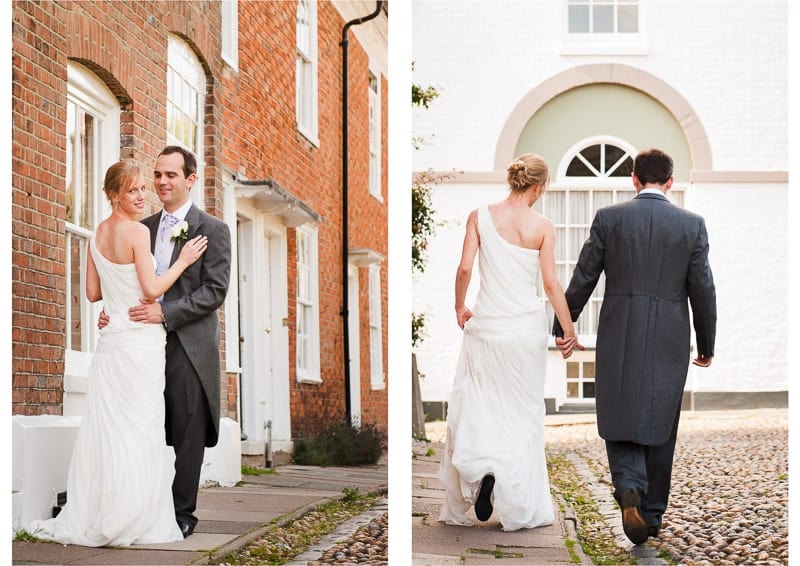 The bride’s over the shoulder gaze invites the viewer in to a quiet moment between the newlyweds. On the right we are excluded from their world as they walk away together.

This is an interesting camera angle, because how the viewer feels depends on:

If the subject is a stranger, the viewer could again feel like a voyeur. It would also be very easy to make the image feel a little creepy like we’re sneaking up on the person.

If the person looks back to camera it feels like they’re inviting us in (as long as their expression is happy or at least neutral) and we’re on a journey together.

For the second point – on how close they are to camera – I’ll explain a little more below with wide angles and close ups.

Here the psychology of personal space influences the image.

Angles in photography aren’t just about where you’re placed around the subject, they also include how close you are. This is referred to as the field of view.

In other words, how much we can see of a scene, and a wide angle lens allows us to see more of the scene than a telephoto lens.

Imagine you’re driving through a tunnel. The closer you get to the tunnel exit, the more of the world you can see and the wider your field of view becomes.

Further reading:  What is focal length and how to use it in photography

As we go through these last three camera angles, consider how different each would feel if the subject had their back to us and was walking away.

A wide camera angle in portrait photography includes a lot more background in the image.
The subject is smaller in the scene and therefore more distant psychologically, making the viewer more of an observer.

The connection is with the entire scene, not only the subject.

With this camera angle the viewer is more connected to the subject, because we’re closer, but still not part of the scene.

There’s enough space in the frame for more than one person, so the subject may well be engaged with another person in the photo. Or they could be on their own, but engaged with their thoughts or the scenery.

We could still have the feeling of being an observer on the sidelines with an invisible barrier between us and the subject.

With close up photography, in any genre, we are very much there and quite literally in the subject’s face, noticing all the details. It’s a highly engaging camera angle.

The subject’s face doesn’t have to fill the entire frame to qualify as a close up.

A head and shoulders photo is also considered a close up. No wonder the headshot is the go to photo for business portraits! 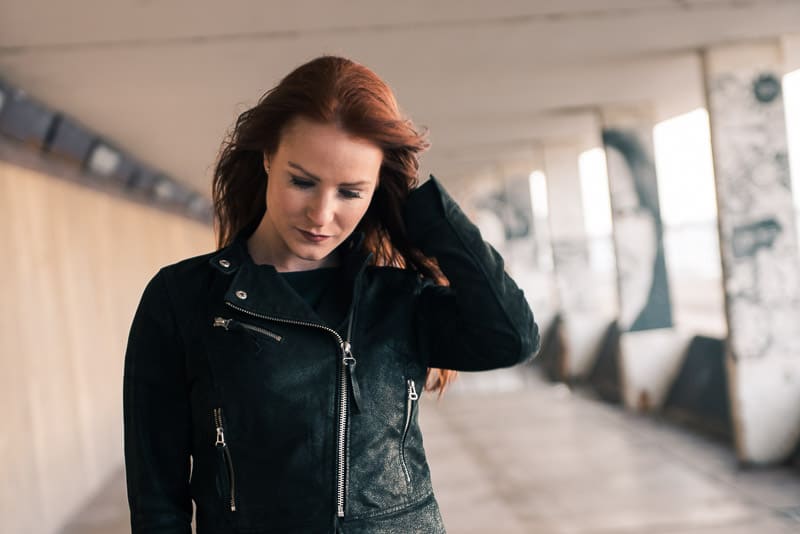 I could say that this is a Dutch tilt, but it just looks like I was careless (which I was) and then didn’t fix the photo by straightening it in post production.

I hesitate to include this camera angle, because it’s dated, was overused and gets used badly, but I’d be remiss in not mentioning it.

To do the Dutch tilt, also called Dutch angle, you simply tilt your camera one way or the other so that the photo is off kilter. This brings tension to the image, because it:

Further reading: How to use diagonal lines in photography composition

The danger of using the Dutch tilt is that it can look like you’re trying too hard and not succeeding, or you didn’t hold your camera level and then didn’t straighten it in post. To get it exactly right you need to:

So as you can see, because we live in a three dimensional world, you have more than one angle to consider when framing an image and deciding on what you want to communicate with the photo.

It’s all part of photographing intentionally, which is the next step after we’ve mastered exposure and focus.

To wrap up, here’s a quick test…

What’s the feeling of an image if you photograph:

If you have any questions about using different camera angles in photography, let us know in the comments.

Also, I love good news, so if my photography tips have helped you to understand camera angles, share that too.

Lens flare is great when you want it in a photo and many times photographers add a fake lens flare to photos in post production. However, when you've got unwanted lens flare, you'll need to remove it...