If you’ve heard of the golden ratio for photography composition, there’s a very good chance that you’ve received wrong advice.

It seems that in this quick-fix world use of the golden ratio as a composition technique has been smudged.

I’m not going to claim to be an expert on the golden ratio. I don’t even fully get the math behind it. What I do know is that it’s a very exact ratio. And this is why you can’t sort of use it.

You either use the golden ratio in photography, or you don’t. 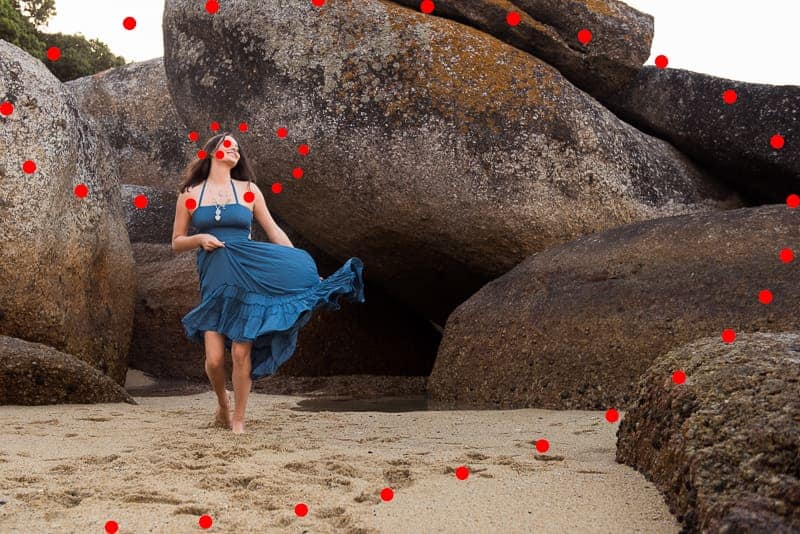 The other really important aspect of it is that you can’t just apply it in post production to any photo by cropping the image to fit the golden ratio rule. As a photography composition technique, there’s more to it than just cropping.

What is the golden ratio?

It has several other names, depending on how it’s used, including:

According to Wikipedia, “In mathematics, two quantities are in the golden ratio if their ratio is the same as the ratio of their sum to the larger of the two quantities.”

If you’re anything like me, that sentence meant less than zero to you. So, here’s a diagram of the golden ratio. 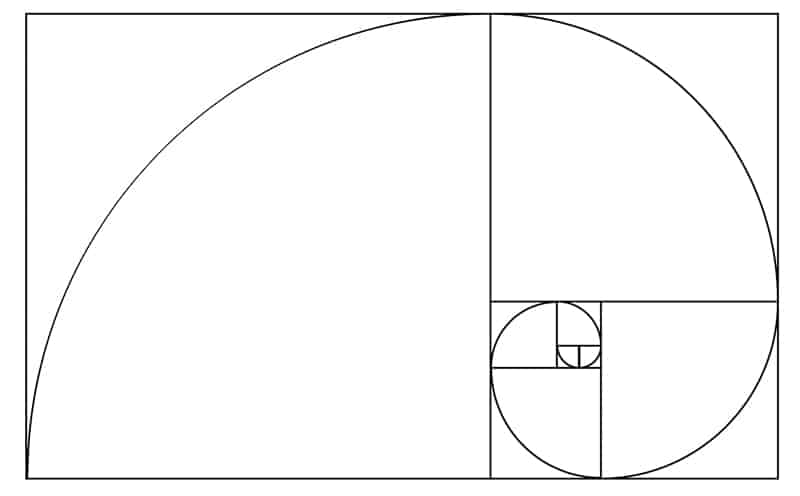 In simple terms, it shows how a rectangle image is divided up into squares and, by drawing an arc from the corner of the large square to the opposite corner, and then ever onwards to the next smallest square, you end up with the golden spiral.

There are so many articles written on the golden ratio. Not just by photographers, but  by scientists and mathematicians way more qualified than me.

So, I won’t go into the mathematical detail (I’m not a mathematician) or discuss Fibonacci. Other than to say the golden spiral is also called the Fibonacci Spiral, or Fibonacci Sequence and a lot has been written on this shape in nature. Here are a few of the standard examples given: 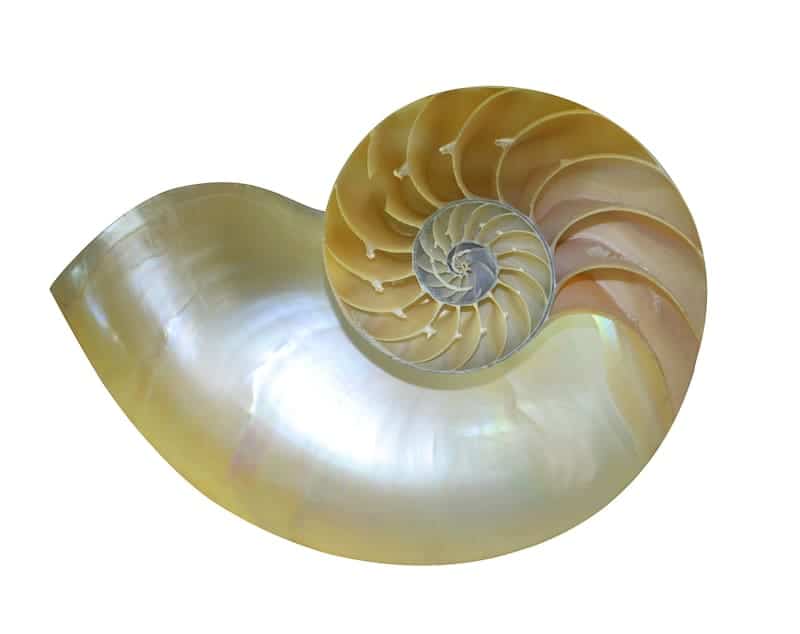 However, these articles don’t address how the golden ratio relates specifically to photography composition, which I do know about.

So let’s look at what golden ratio photography composition is and what it means to us photographers.

Applying the golden ratio in photography

Very simply, what it means as a composition technique to us as photographers, is: compose your image so that visual clues lead along the curve of the golden spiral, directing your viewer’s eye, towards your focal point where the spiral ends.

A name synonymous with exceptional photography composition is Henri Cartier-Bresson. In his book, Decisive Moment, he said:

“In applying the Golden Rule, the only pair of compasses at the photographer’s disposal is his own pair of eyes.

Any geometrical analysis, any reducing of the picture to a schema, can be done only (because of its very nature) after the photograph has been taken, developed, and printed – and then it can be used only for post-mortem examination of the picture.

I hope we never see the day when photo shops sell little schema grills to clamp onto our viewfinders; and the Golden Rule will never be found etched on to our ground glass”

What would he have to say about what I’m about to show you?! Sorry, Henri.

The golden ratio tool in Lightroom

Even though I said you can’t just go and crop an image to apply the golden ratio in photography, you can use it in Lightroom.

Just please remember that, just because you cropped an image to place the focal point in the desirable place according to the golden ratio, doesn’t make it a well composed image. You have to implement all aspects of the technique for it to be considered well composed.

We’ll get to that in a minute.

Any photo can be cropped to make the golden spiral fit where you want it…but that doesn’t make the composition right. It completely misses the magic of the technique.

How to find the golden ratio overlay in Lightroom:

In the develop module…

When you crop your photo to place your point of interest at the end of the coil, remember to crop from the corner, maintaining the exact ratio of the image. If you just drag in one side and crop the image to a square or a skinnier rectangle, you will have messed up the proportions of the original rectangle essential for the golden ratio.

While we’re on the subject of cropping in Lightroom, you’ll see that there are other overlays you can use, including the golden triangle, which I’ll cover in another article.

Now that we know what it looks like, there’s a really obvious point that arises… Placement of the subject, or focal point, or point of interest, looks kinda similar to subject placement with the rule of thirds.

Not the same, but close.

The image below shows both the golden spiral and the rule of thirds grid. 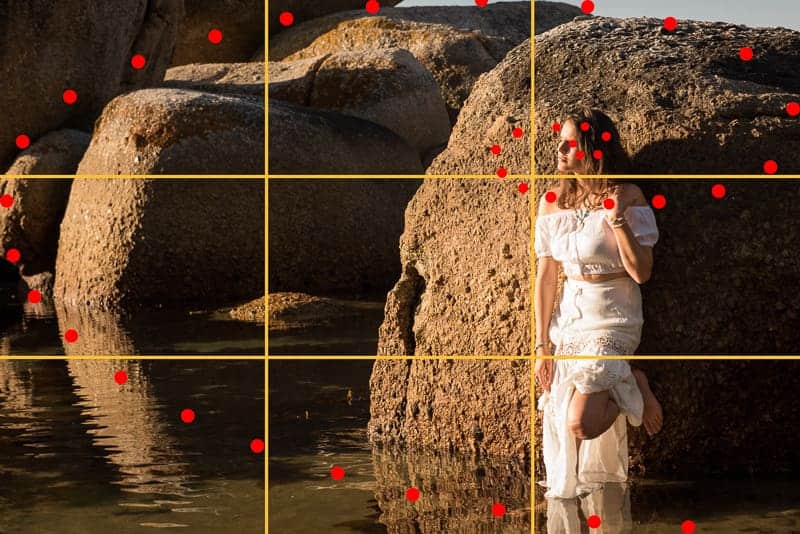 The golden ratio vs the rule of thirds

What’s the difference between the rule of thirds and the golden ratio?

With the rule of thirds we concentrate on vertical and horizontal lines and placing the point of interest where they intersect.

Further reading: Why you need to know the rule of thirds – and how easy it is

Golden ratio photography is about leading the eye along a curved line to your point of interest. The curved line doesn’t have to be an actual curve, but the eye should travel in that arc. Subjects’ gazes within the image can also create this invisible curve. 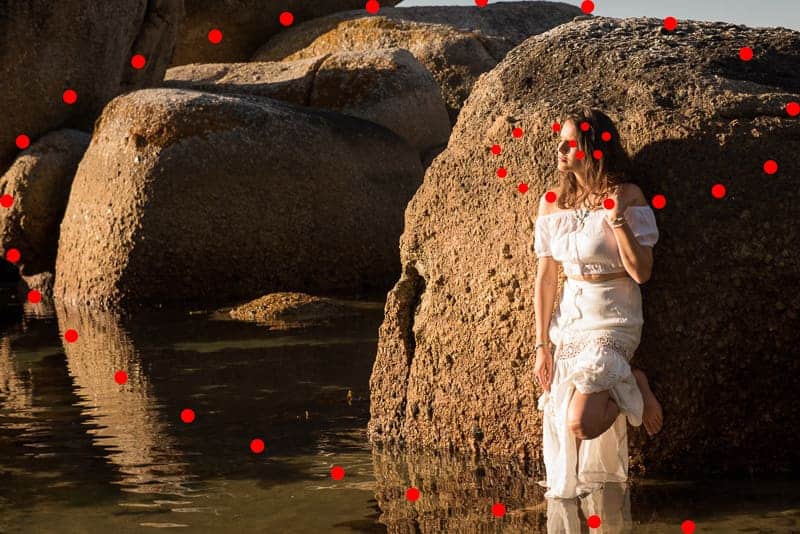 In practical terms, out in the field, it’s easier to compose with the rule of thirds, especially if you have the grid turned on in your camera so that you can see it in the viewfinder.

If you set out to photograph an image using the golden ratio, make sure you are very exact in your composition.

If you achieve it, I’m sure your image will be amazing. Not because you applied the technique, but because you put thought into it. You’ll have considered your design beyond just lining up elements to form a spiral, and you’ll have achieved what you set out to do.

If you luck upon such a composition, especially in street photography, where so much is up to chance, just know that the rest of us are envious!

“Composition must be one of our constant preoccupations, but at the moment of shooting it can stem only from our intuition, for we are out to capture the fugitive moment, and all the interrelationships involved are on the move”.

To see examples of his work with the golden ratio applied, Google “Henri Cartier-Bresson golden ratio”.

Click to discover 19 composition techniques for creating photographs that wow

If you have any questions about the golden ratio photography composition, let us know in the comments.

Also, I love good news, so if my photography tips have helped you to understand how to use the golden ratio, share that too.

How to avoid an overexposed sky in photos …without using Photoshop