If you’re not a technical person, the thought of any kind of histogram is a bit intimidating. But histograms are actually really simple and helpful once you know how they work, especially the Lightroom histogram.

Where is the histogram in Lightroom?

In the library module it’s purely for reference, while in the develop module you can actually make changes by clicking and dragging within the histogram.

More on how to use it in a moment… 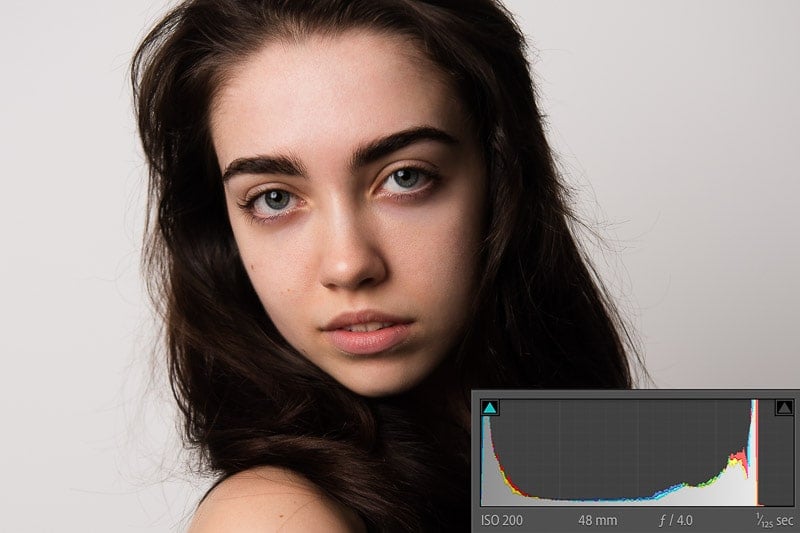 How do I turn off histograms in Lightroom?

The histogram doesn’t have to be visible.

Any time that you feel it’s taking up too much screen space and you don’t need it, like any of the other panels, you can close it by clicking on the little triangle in the top right of the panel.

How should a histogram look in Lightroom?

It’s worthwhile noting that there isn’t a perfect histogram shape.

Just like with your camera histogram, the shape of a Lightroom histogram depends very much on the tones in the image and the lighting conditions. 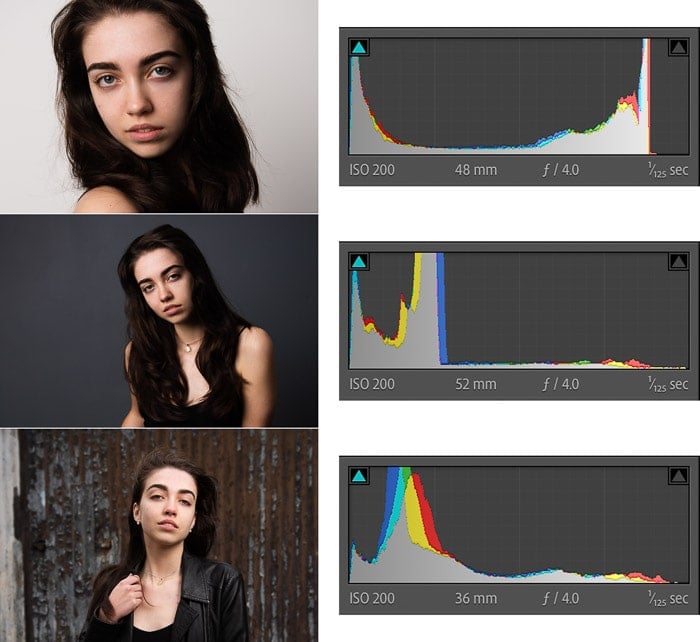 For these three images:

The only technical difference was focal length. That has nothing to do with the shape of the histogram, but I thought I’d mention it for clarification.

Incidentally, being able to see camera settings is a great automatic feature of the Lightroom histogram!

Here’s what did have an impact on the histograms for these photos – background:

How do I use a histogram in Lightroom?

To understand how to use a Lightroom histogram, you need to know:

1. Areas of the Lightroom histogram

The Lightroom histogram has 5 different zones, or tonal areas. From left to right they are:

If that sounds familiar, it’s because they’re also the names of sliders in the basic panel in the develop module. This, by the way, is a clue to how to use the Lightroom histogram and why it’s so helpful.

When you hover your cursor in the different areas of the histogram you’ll see that the gray shading for that area becomes slightly lighter and the zone type appears as text below the histogram.

Speaking of hovering your cursor…

Two times this is particularly helpful:

2. Types of histograms – luminance and color

In Lightroom, histograms look different for color and black and white images.

In color photos the color values of the image are depicted, so you see several histograms overlayed on each other.

The top layer, the luminance histogram, is gray and shows brightness values.

You’ll also sometimes see magenta, yellow and cyan histograms when these colors feature in an image.

Black and white photos have only a luminance histogram, which is gray.

3. What do the peaks mean in a histogram?

The peaks represent where the data is in an image, so:

Just like with a camera histogram, it doesn’t matter if the peaks hit the top of the histogram.

The time to be concerned is when the data pushes up against either side of the histogram. Not just near, but actually touching the sides. This indicates either: 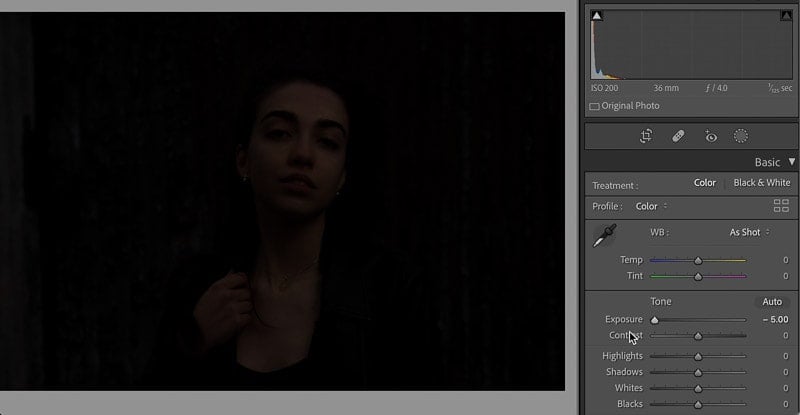 This is an extreme example of underexposure.

It’s so dark that you probably can’t tell, but it’s the same image as the one above. Here I moved the exposure slider all the way to the left.

A gap at the edge of the histogram

In the histogram of the image above you’ll notice a gap on the right.

This indicates that there’s no data in the whites area, so I could slightly increase the exposure, the highlights and/or the whites to get a brighter image without risk of overexposure.

4. How to see underexposure and overexposure in the Lightroom histogram

One of the best features of the Lightroom histogram, regardless of whether your screen is correctly calibrated or not, is that you can check the histogram to be certain there’s no clipping where you don’t want it.

Clipping is a term used to describe both underexposed and overexposed areas of an image. When an image is:

Generally, it’s okay to have some clipping in the shadows, but most of the time we avoid clipping the highlights as we want to retain detail in the highlights.

There’s a triangle on each side of the histogram at the top. These change color from dark gray when there’s clipping:

These two histograms are from the same image:

How to see clipping on the image in Lightroom

But you don’t have to refer to just the histogram to see under and over exposure.

The affected areas in the image can also be switched on in Lightroom, just like you would switch on “blinkies” on your camera histogram.

Lightroom gives you a few choices to make it show up:

Below are the edited images to go with the above histograms. 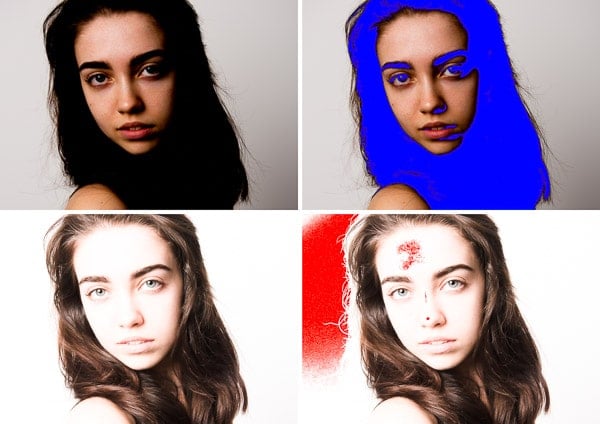 How to change brightness levels directly in the Lightroom histogram

Instead of the using the sliders in the basic panel, to change the brightness of any of the areas in the histogram just:

So, for example, if you want to darken the shadows:

You could achieve exactly the same result by clicking on the shadows slider and dragging left. It’s just another way to do it.

You’ll notice how the shape of the histogram changes as you do it.

How all edits affect the Lightroom histogram

As you edit in Lightroom the histogram shape changes.

The only edit that doesn’t affect it is spot removal, unless of course you have a picture of a black cat in snow and use the spot removal tool to remove the black cat. Then you’re left with just whites and no blacks, which of course would alter the histogram. But that’s an extreme example.

Experiment with all the controls in Lightroom and double check your edits against the changes in the histogram, to see how helpful it is.

Here are two examples to show you what I mean… 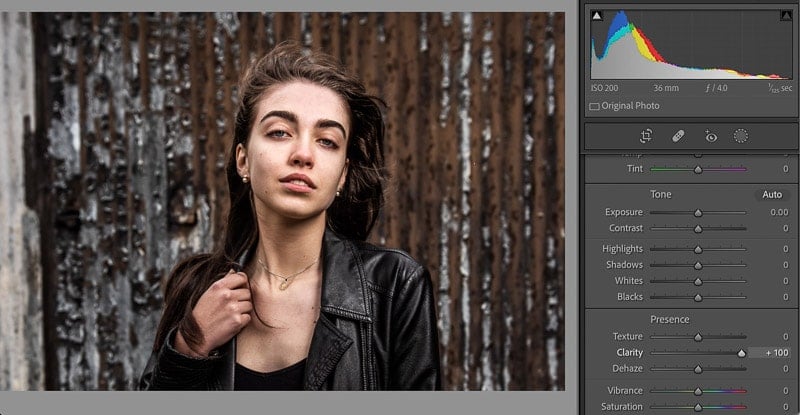 Note the changes in the histograms. 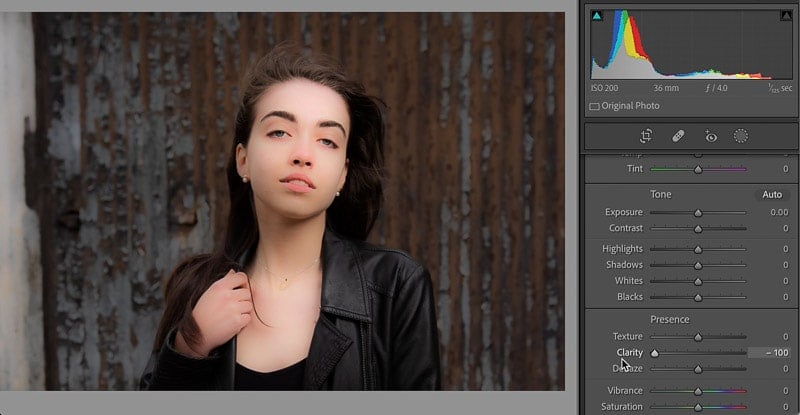 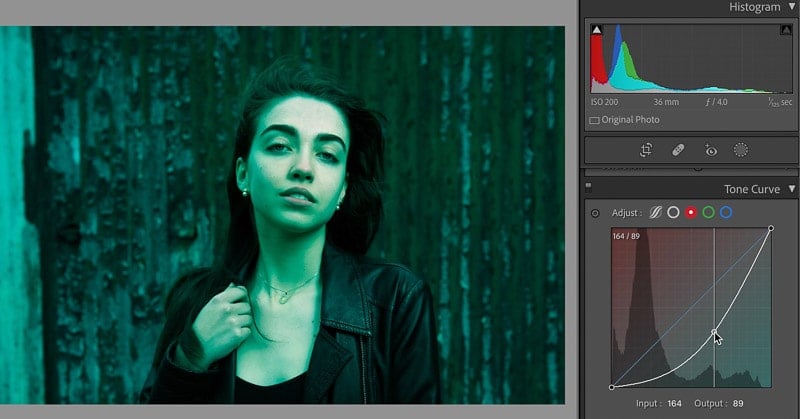 In the above image I selected the red channel in the tone curve, clicked in the center and dragged the curve down to remove reds from the image, which made it more cyan.

Below I did the opposite and by increasing reds, reduced cyan.

Note how the red peak has moved in the histogram from the darks area to the exposure (midtones) area. 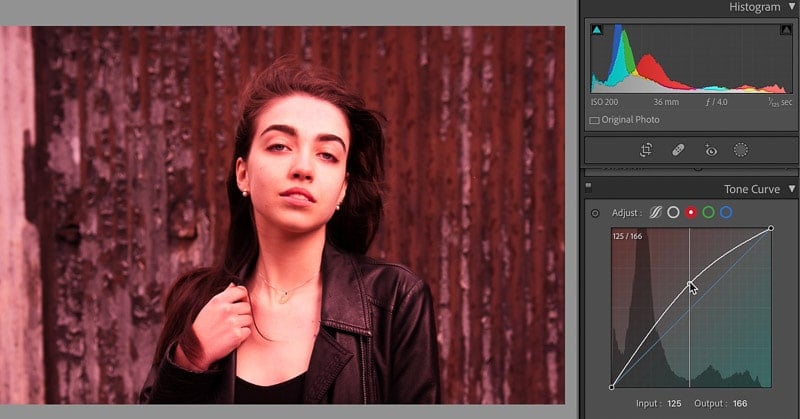 If you have any questions about the Lightroom histogram, let us know in the comments.

Also, we love good news, so if our female posing tips have helped you to understand how to use the histogram in Lightroom, share that too.